Ten years ago they summarised their ideas on the industry of the future for the first time under the term “Industry 4.0”, now professors Wolfgang Wahlster and Henning are celebrating the global success of their concept. The word mark “Industrie 4.0” went viral and with their vision of the digital factory of the future, the two pioneers inspired innovative projects worldwide. In a full-page article in the Frankfurter Allgemeinen Zeitung, former GDNÄ president and computer scientist Wahlster and former SAP board spokesman Kagermann trace the career of their concept and outline a new vision for its second half. The potential of Industry 4.0 is far from exhausted, the two experts write. They advocate the increased use of artificial intelligence (AI) in the industrial sector to meet the challenges of an economy that is both sustainable and competitive. At the Hanover Fair from 12 to 16 April, the success of this innovative concept from Germany will be celebrated, says Wolfgang Wahlster. In May, he will present the plans for the industrial AI phase at government level and discuss them with Chancellor Angela Merkel and Economics Minister Peter Altmeier. 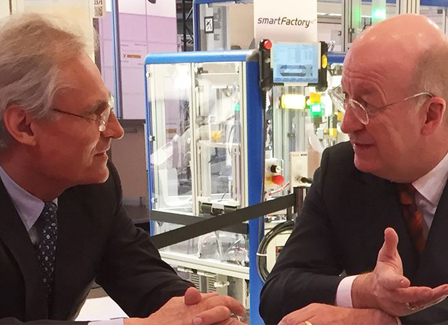 In conversation at the Hannover Fair: Henning Kagermann and Wolfgang Wahlster (right).