Day 1 of the Festive Assembly in Leipzig: Thursday, September 8, 2022

Preparatory meetings since early summer ,intense discussions and finally agreement on three core topics: On the afternoon of the first day of the Assembly, participants of the Students’ Programme presented their questions to science, challenging three renowned scientists on the podium: biologist and Director of the Alfred Wegener Institute for Polar and Marine Research, Professor Antje Boetius, structural biologist and President-designate of the Max Planck Society, Patrick Cramer, and civil engineer, science manager and acatech President Jan Wörner. 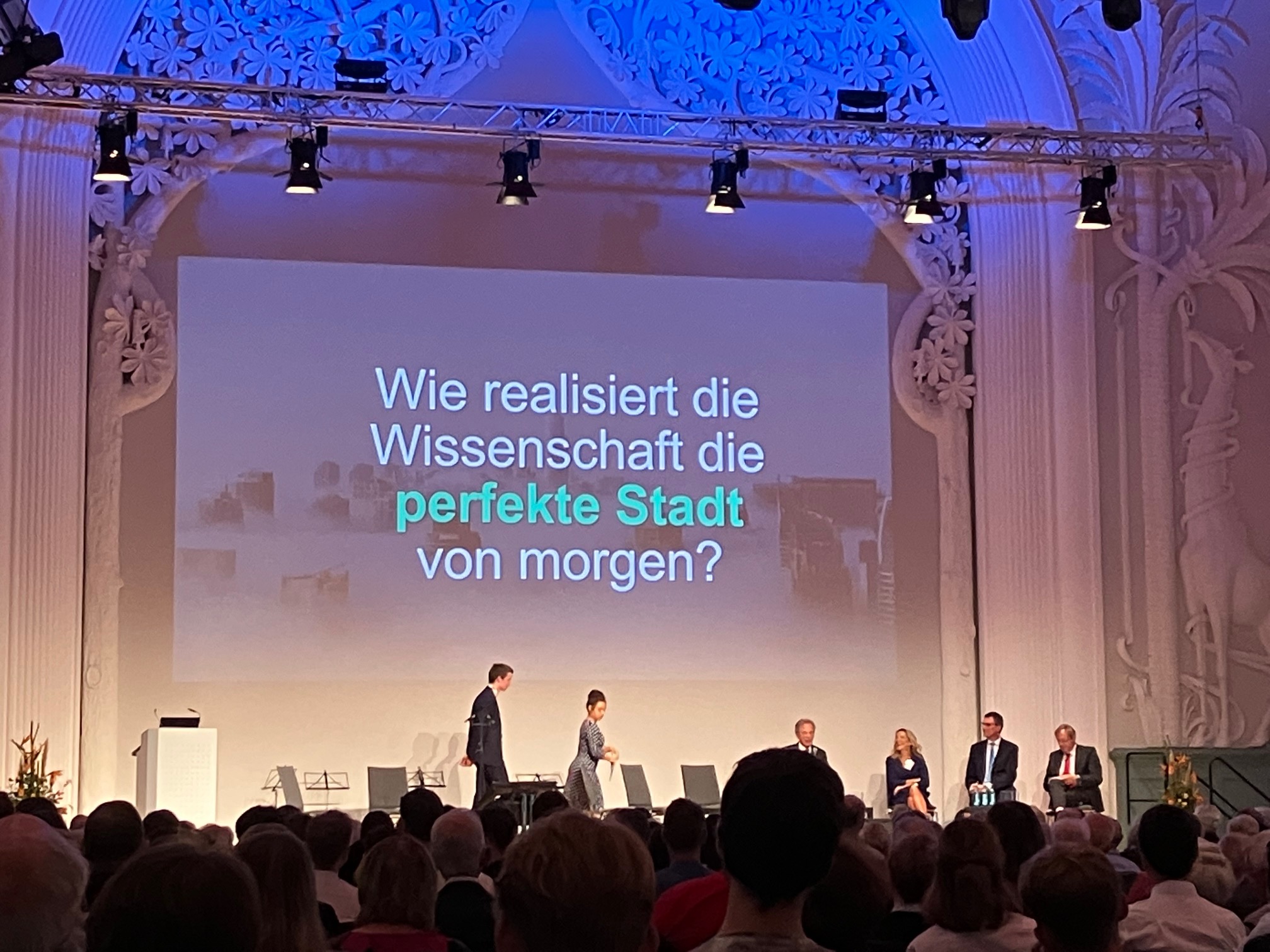 Student presentation at the festive assembly with questions the team of scientists (in the picture on the right: Antje Boetius, Patrick Cramer and Jan Wörner).

Zoe Klee and Julius May, representing the Biology Team, kicked off the day. They wanted to know whether algae can be used to break down atmospheric CO2 and other greenhouse gases such as methane dissolved in seawater – and what methods might be used to optimise algae for this task. A lot of research is being done on this, said Antje Boetius, for example in Munich-Martinsried. However, the enzyme needed for this is not easy to use. “The chances that we can get plants to absorb more of our CO2 are not very high. It would be much better if we emitted less.” Patrick Cramer didn’t want to raise hopes for quick solutions either: “It’s not that simple with algae and their optimisation.” After all, he said, biomass is the great unknown in the climate system: “How much carbon is sequestered and where? We still can’t predict that in our models.” 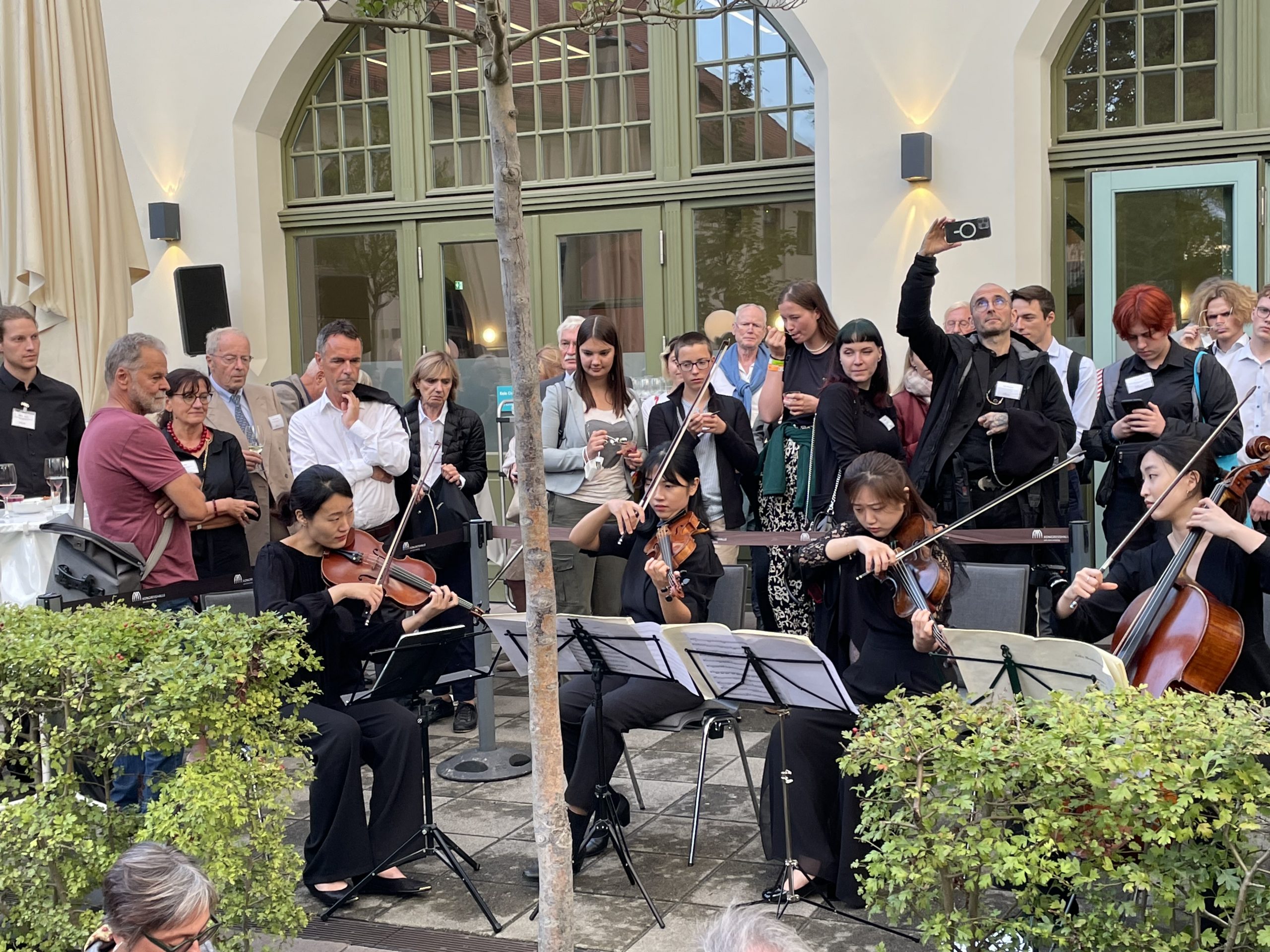 Concert by the Albero Quartet at the evening buffet on the first day of the meeting.

The question posed by the medicine team – Yara Mshinsh and Elias Pantzier – was: “What do you think is necessary to be able to realise individualised medicine for every person in a timely manner?” There is still no truly individualised medicine, said Patrick Cramer: “So far, patients are divided into treatment groups, for example with the active substance Herceptin, which only benefits certain breast cancer patients.” The student followed up: “What can Max Planck Institutes contribute to advancing individualised medicine?” “We do basic research,” Patrick Cramer answered, “but if we have a technology with benefits for humanity, we like to develop that further, for example within the framework of Max Planck Innovation, a platform for spin-offs from research.” One example of success, he says, is a kinase inhibitor for cancer therapy. Cramer: “We are moving forward rapidly and are always discovering new principles that sometimes only benefit patients decades later.”

Astrophysicist Günther Hasinger explains his theory on the origin of dark matter.

Patricia Städtler and Janis Hofmann from the Urban Development team made a combative appearance: For the perfect city of tomorrow, they called for price-optimised housing, smooth and emission-free traffic, and an “absolute circular economy” that recycles scarce resources such as sand and concrete. “I warn against looking for the perfect city,” said Jan Wörner, recalling the many urban visions that were never realised. Instead of chasing a cloud cuckoo land, the engineer advised enabling the best possible city – “that should be our goal”. The city of the future, he said, must be flexible, cost-effective and, last but not least, safe. “The probability of the ceiling falling down here in the congress hall is not zero,” Wörner said, earning a laugh. Wood is not the universal solution for climate-friendly building, he stressed, and concrete is by no means dead. “Concrete has many faces, and one of them is nut chocolate: it, too, consists of a filler, chocolate, and an aggregate, nuts.” So cement is by no means the only concrete option, Wörner said, adding, “In the future, we’ll also be able to build structures from algae.” It is important to keep many technologies in mind, he said – “we have to keep an open mind.”

At the end of the lively discussion, entertainingly moderated by GDNÄ President Professor Martin Lohse, Patrick Cramer wooed participants in the student programme: “In science, we need young people like you.” – On Friday, 9 September, research will be challenged again: through questions in the Biology session, moderated by the next GDNÄ President, Professor Heribert Hofer.

The Albero Quartet from Leipzig.

With a view to the current shortage of skilled workers, Federal Research Minister Bettina Stark-Watzinger encouraged the young people at the conference: “Get involved – Germany needs you.” Dr Matthias Rößler, President of the Saxon State Parliament, picked up on this thought and thanked the GDNÄ for its commitment to young people. He recalled that the Natural History Society had returned to Saxony time and again throughout its history. Professor Thomas Fabian, Mayor of Leipzig, pointed out the exceptionally dynamic development of his city – with a population increase of one hundred thousand people in just ten years: “Word has spread about our high quality of life, especially among young people.”

The Alexander von Humboldt Medal for his special services to the GDNÄ was awarded to the Society’s former president (1995-1996), physics professor Joachim Treusch. In her laudatory speech, Professor Eva-Maria Neher said he was one of the “far-sighted people” who had always promoted communication with the Society. “Joachim Treusch is a great reformer of German science, his advice and wisdom are in demand as ever.” In his short acceptance speech, Treusch recalled an astonishingly correct prediction on climate change made by the German Physical Society in 1985, which did not lead to the necessary consequences: “My hope is that the youth will learn from our mistakes.”

The Lorenz Oken Medal 2022 goes to Dr Mai Thi Nguyen-Kim. The chemist and journalist was in Leipzig via video; she will be presented with the award for her public science communication at the Forum Wissenschaftskommunikation in Hanover in early October. Mai Thi picked up on the motto of the student programme “We only have one world” and encouraged the young people in the hall to fight for a tomorrow worth living: “You are the future of our species and that makes me hopeful.”

>> Instagram channel of the @gdnae.society
>> Reports from Leipzig: The anniversary in the media
>> Program of the 2022 Festival Assembly (4.5 MB, PDF)