Hardly anyone knows the German science landscape as well as she does: Why microbiologist Bärbel Friedrich’s balance sheet is mixed thirty years after reunification, what she thinks about European genetic engineering law and how Corona has determined her summer.

Professor Friedrich, this year we are celebrating thirty years of German unity. Have East and West really come together in science?
In Berlin there are no longer any major differences. I see many good universities and non-university research institutions in the East and the West. Outside Berlin, however, in the eastern German states, there is a lot of catching up to do.

You were professor of microbiology at the Free University of Berlin at the time of reunification. How did you experience these years? At the FU, fear began to spread soon after the Wall came down. There was no longer any need for a Free University as a bulwark of the free world. Before the Wall came down, subsidies had flowed abundantly, but that ended abruptly. Many colleagues speculated that the FU would soon be integrated into the Humboldt University (HU). I moved to the HU in 1994 to establish a new subject there, scientific microbiology.

The FU still exists and in 2007 it even received the Seal of Excellence – years ahead of the other Berlin universities.
Yes, that was a huge surprise, but also a powerful incentive for the HU. The federal and state Excellence Programme has changed the mood, which was previously characterised by competition and even hostility. Now it was a matter of cooperation, and that was the key to success. Joint Collaborative Research Centres and Clusters of Excellence were created – in my field, for example, the UniCat Catalysis Cluster, which Berlin and Brandenburg universities have been operating together since 2012. The highlight of this development is certainly the successful performance of the Berlin University Alliance in the 2019 Excellence Competition.

Things look different beyond the capital. What about academic unity in the east German regions?
The picture is very mixed. There are some outstanding institutions, but university research in eastern Germany still lags somewhat behind in terms of breadth. In the funding ranking of the German Research Foundation, for example, West German universities do much better. If we look at the last Excellence Competition in 2019, we see that in East Germany, apart from Berlin, only the TU Dresden is at the top of the list. However, some universities have developed particular strengths. Let me illustrate this with an example. When I first came to Greifswald in 1996 with a delegation from the Science Council, I had the impression that the Chemistry Institute had to be closed down immediately. The equipment was completely outdated, the scientific quality was at rock bottom.  But over the years, the standard has improved considerably and today the university is doing excellent work, especially in medical research. I was able to observe this at close quarters because as director of the Alfried Krupp Wissenschaftskolleg in Greifswald, I worked closely with the university for many years.

How do you experience personal contact with each other in everyday life?
In Greifswald and especially at the university, you meet each other impartially.  But in the countryside, as a Westerner I am still viewed critically. Everyone knows that you can’t do without tourists, but actually, you’d rather stay among yourself. To my mind, that expresses the frustration of a generation of losers. It’s different with the young people, they no longer see themselves as Ossis, but as Germans. The youth is my hope – with them the German division could grow.

You have been emeritus for a while now, but you are still very active in science policy. Together with some colleagues, you recently took a stand against a ruling of the European Court of Justice on genome edited plants. Why?
Many scientists were immensely disappointed with the ruling. Because it means that a pioneering genetic engineering method is practically not used in Europe in the crop sector. With CRISPR-Cas, as the technique is called, individual building blocks in the genome can be altered very easily, precisely and inexpensively – we scientists speak of editing. The method is a real quantum leap. It has very quickly conquered the laboratories of the world and has recently been awarded the Nobel Prize in Chemistry.  Not only could CRISPR-Cas be used to achieve larger harvests, the technique could also significantly reduce the use of fertilisers and pesticides. It is also suitable to breed plants that are more resistant to climate change.

What does the European Court of Justice have against the method?
It is considered a risk and is subject to the complex and impractical requirements for genetically modified organisms, or GMOs for short. The restrictions have led to a virtual absence of research in this field in Europe. Anyone who wants to work in the field and test plants in the field has to move, for example to Canada. There are now many genetically modified plants produced using older techniques and more than a hundred genome-modified plants. These include soybeans with healthier fatty acids, gluten-reduced wheat and potato tubers with longer storage life. The changes in the genetic make-up of the new varieties could also have been caused by chance or conventional breeding methods -– their origin is usually no longer clearly identifiable. Harmful effects of GMOs, a very important point, have never been reported.

What needs to be done?
European genetic engineering legislation is outdated and should be revised. We came to this conclusion in a joint statement by the National Academy Leopoldina and the Union of German Academies. As a short-term measure, we propose that genome edited plants should only be classified as GMOs if genetic information foreign to the species is introduced – i.e. only in exceptional cases. In the longer term, we are advocating a completely new legal framework which does not define the risks to human health and the environment in terms of the process used, but in terms of the characteristics of the product produced.

What are the chances of your initiative?
In politics, the FDP is completely on our side. The Greens are gradually becoming more open-minded. We have many advocates in the media, and we are receiving additional support from farmers. Even organic farmers who are pleased with the prospect of pesticide-free agriculture on the probably drier soils of the future, start to hesitantly support us.

You have contributed to numerous scientific policy papers. This year there were particularly many. How did this come about?
It all started on March 12 – I was just returning to Berlin from a microbiologists’ conference in Leipzig. I got a call from the Leopoldina’s capital office telling me to come right over, it was urgent. In an interdisciplinary team, we then immediately started work on the first policy paper on how to deal with the corona pandemic, which was published just ten days later. In spring and summer I worked on four other statements – from the home office, practically never in attendance. All in all, it was an enormous effort, partly because we knew that we had a huge responsibility. What was good was the close cooperation with politicians, which I had never experienced before in such intensity.

Was your team able to maintain its scientific independence?
We always tried to make recommendations for action on the basis of the latest scientific findings, knowing well that politicians ultimately have to decide according to their own criteria. There is a clear line of demarcation here, which preserves our independence.

You have known and shaped the German science landscape for many years. What place does the GDNÄ have in this?
It has particular strengths that cannot be found elsewhere in this combination. At its meetings and, increasingly, on its website, the GDNÄ conveys up-to-date knowledge at a high level, from an interdisciplinary perspective and in an easily understandable way. A big plus point are the student programmes and the cooperation with teachers. The older population is often frightened when it comes to future topics. In order to make progress here, we need to bring scientists into the public eye, especially in schools, and win over the next generation. This is where I see great potential for the GDNÄ . 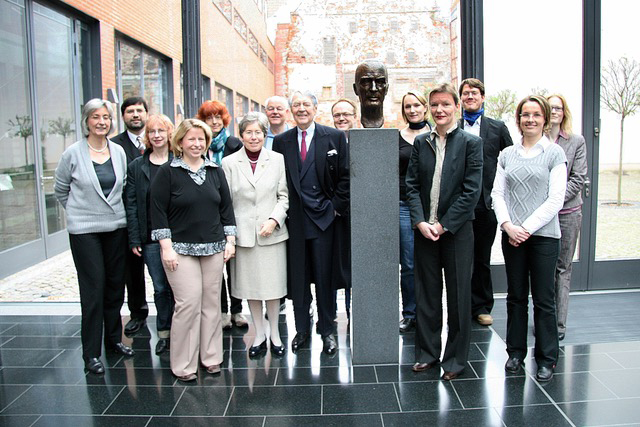 2008 at the Wissenschaftskolleg Greifswald: Bärbel Friedrich, surrounded by Fellows and staff and, to her right, Berthold Beitz, then Chairman of the Board of Trustees of the Alfried Krupp von Bohlen und Halbach Foundation.

Biographical information
Bärbel Friedrich was born in Göttingen in 1945. After completing her doctorate in microbiology at the university there, she went to the Massachusetts Institute of Technology (MIT) for two years as a postdoctoral researcher and then habilitated in Göttingen. In 1985, she became Professor of Microbiology at the Free University of Berlin; in 1994, she moved to Humboldt University. From 2008 to 2018 she was Scientific Director of the Alfried Krupp Wissenschaftskolleg, which promotes Greifwald University and the entire science location. Bärbel Friedrich was involved in many academic institutions and committees. Among others, she was Vice-President of the Leopoldina (2005 to 2015), member of the Bundestag Commission of Inquiry “Ethics and Law of Modern Medicine” (2003 to 2005), Vice-President of the German Research Foundation (1997 to 2003) and member of the German Science Council (1997 to 2003). She has received numerous awards, including the Federal Cross of Merit for her scientific commitment in the new federal states and the Leopoldina Medal of Merit.

The scientist
In her research, Bärbel Friedrich investigates, among other things, how bacteria can be used to produce and convert hydrogen. In the excellence cluster Unifying Concepts in Catalysis (UniCat), her team succeeded in genetically modifying cyanobacteria to synthesise hydrogen from water. The process is too complex for the mass production of hydrogen as part of the energy revolution, says the microbiologist, and electrolysis is the more suitable method here. “In the context of green chemistry, however, biologically or electrolytically produced hydrogen is very valuable, for example for the production of basic chemicals”. Biocatalysts, such as those Friedrich and her research group are investigating – so-called oxygen-tolerant hydrogenases ­­­– play a promising role in this.

>> Opinion on the European Court of Justice ruling on genetic engineering 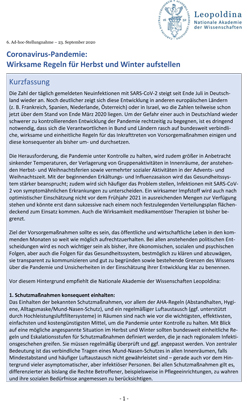 Bärbel Friedrich also contributed to this ad hoc statement on the Corona pandemic.

>>  All Ad-hoc statements by the Leopoldina in the Corona crisis