The GDNÄ bids farewell to its former Secretary General.

From 1999 to 2004, Dr. Wolfgang Donner was Secretary General of the Society of German Natural Scientists and Physicians (GDNÄ). In this function, the former member of the Executive Board of Bayer AG was responsible for the organisational preparation and implementation of important GDNÄ meetings. On 5 May 2021, Wolfgang Donner died in the circle of his immediate family in Cologne at the age of 86.

The President of the GDNÄ, Professor Martin Lohse, says: “Wolfgang Donner led the GDNÄ with great commitment and reliability as Secretary General. The successful meetings of our society in Berlin, Bonn, Halle/Saale and Passau bore his signature. Later, he assisted our Board as  adviser and put his experience and networks at the service of the GDNÄ. We remain bound to him and his family in gratitude and sympathy.”

Born in Breslau, Wolfgang Donner came to Hamburg after the war to study physics, where he passed his diploma examination in 1962. He then moved to the University of Frankfurt. There he earned his doctorate and did research for several years as an assistant at the Institute for Theoretical Physics. In 1967, together with his wife, he left for Australia by cargo ship. As a visiting scientist at the University of Perth, Donner began work on the two-volume textbook “Theory of Nuclear Spectra” and expanded his computer science know-how. He was to find his professional home at Bayer AG in Leverkusen, where he joined in 1968 and remained until his retirement in 1997. His field of work shifted more and more towards chemistry during this time, and he was very committed to the digitisation of research. In 1987, he was honoured for this with the Otto Bayer Medal; this was followed in 1990 by his admission to the Bayer Board of Directors. 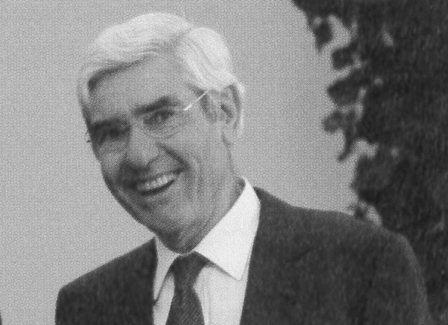