RNA Medicine. Once underestimated, now a beacon of hope

Once underestimated, now a beacon of hope

In the Corona pandemic, mRNA vaccines proved their effectiveness and safety. They mark the beginning of a new era in medicine, says Würzburg infection biologist Jörg Vogel. He will describe the triumph of ribonucleic acid in therapy at the GDNÄ Annual Meeting in Leipzig – and here in an interview.

Professor Vogel, one of the main topics of the anniversary meeting in Leipzig is RNA medicine. What makes this new therapeutic direction so interesting?
The well-founded hope that previously incurable diseases can finally be treated. This was triggered by the great success of mRNA vaccines in the Corona pandemic. Not only could the vaccines be developed very quickly, but they also proved to be highly effective and safe. There is currently an incredible sense of optimism worldwide; some are even talking about a medical revolution. The task now is to transfer the active principle to as many diseases as possible.

Which diseases could be considered?
There are hardly any limits. Research is currently focusing on cancer and cardiovascular diseases. But other common diseases such as dementia are also possible candidates. And for numerous rare diseases, especially when they are caused by defects in a single gene, RNA medicine could finally bring a breakthrough. Some RNA drugs are already on the market in the EU, and I expect to see many new therapies soon.

RNA seems to be an all-rounder. How does it manage that?
It has to do with its many capabilities, which have long been overlooked. In the past, almost everything focused on messenger RNA, or mRNA for short, a messenger molecule that carries genetic blueprints from the cell nucleus to the protein factories in the cytosol. In addition to tRNA, which has also been known for some time and which transports amino acids to the protein factories, the ribosomes, and rRNA, which is a component of these protein factories, many other classes of RNA have been discovered in recent years. They have been given names such as miRNA for micro-RNA or siRNA for small interfering RNA. More than a dozen different RNA classes are now known, and new ones are being added all the time. What is clear today is that RNA controls vital processes in cells, and errors in this control can cause disease. Or, to exaggerate a bit: RNA is the real player in our cells and organs. 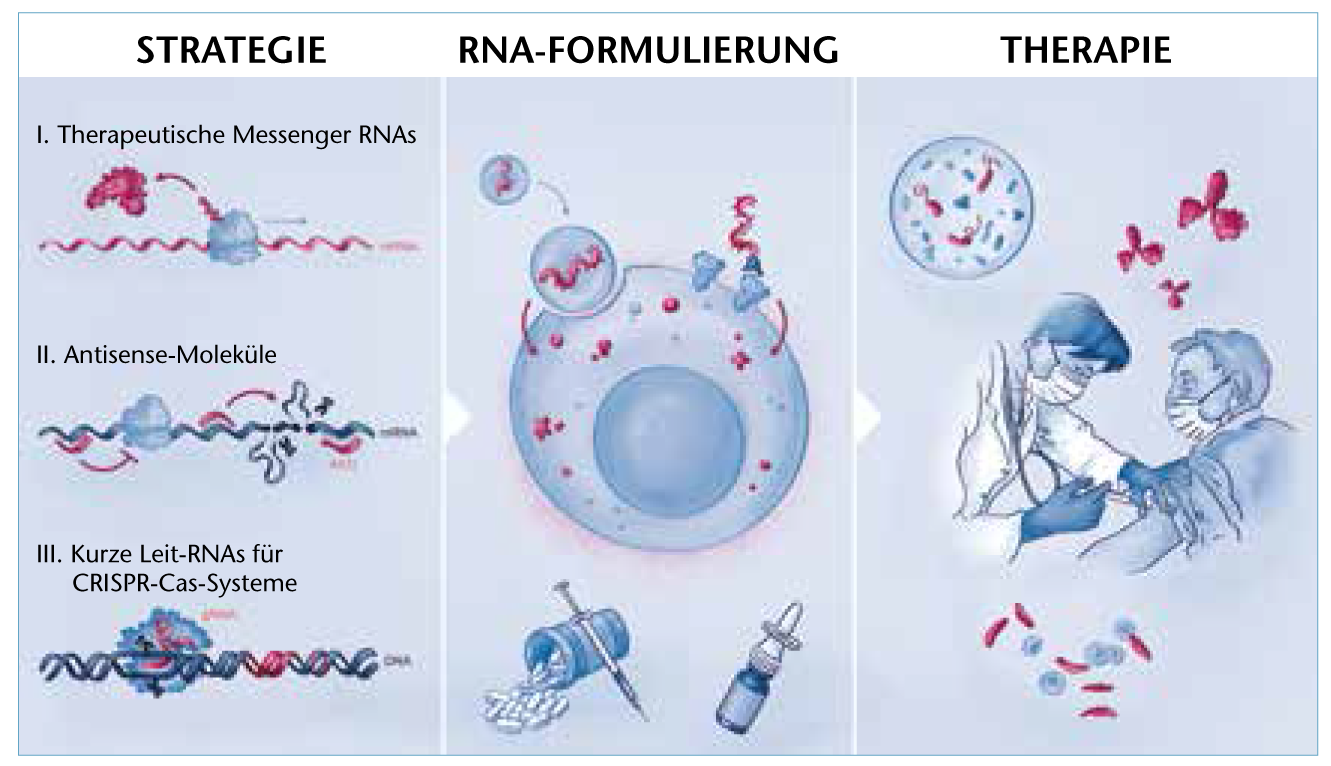 How can the miracle molecule be used medically?
In two ways: in modified form as a drug and, when it comes to the body’s own RNA, as a target for tailored drugs. mRNA vaccines are a good example of the first mode of action. For example, Biontech/Pfizer’s Corona vaccine contains a laboratory-generated mRNA variant of the spike protein of SARS-CoV-2. After vaccination, the body generates this spike protein variant, which elicits a strong immune response. The vaccine functions as an antigen that triggers the production of antibodies by the immune system. Similarly, it is hoped to stimulate the immune system to produce antibodies against cancer cells with the help of specifically modified RNA. Several studies are already underway. The lung cells of cystic fibrosis patients could also be modified using the CRISPR-Cas method so that they produce a vital protein in the correct form. It is not yet possible to predict which of these therapies will prevail from a medical and cost perspective.

Please also explain the second active principle with an example.
In cardiac medicine, for example, research is being carried out to prevent the production of pathogenic proteins by artificially produced siRNA. To do this, RNA snippets are created in the laboratory that have a structure exactly complementary to the sequence of the body’s own RNA – so-called antisense molecules. The idea is to couple them to small liposomes and inject them under the skin. These liposomes are to enter the heart to deliver their siRNA cargo into the cells. The cargo, the plan goes, docks with the body’s own RNA and paralyzes it. In a similar way, non-coding RNA, which does not make proteins in the body but regulates many processes, could be directed in the desired direction when it malfunctions.

In short, what can RNA medicine do that conventional drugs cannot?
One major advantage is programmability: active ingredients can be designed exactly as needed. Another advantage is speed. You can design a therapeutic on screen in minutes and then manufacture it quickly if the production capacity is there. Just think about mRNA vaccines, which were available very quickly. 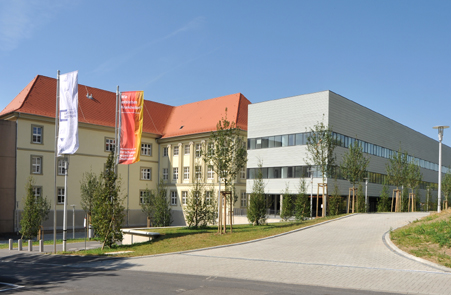 But do RNA therapies do exactly what they are supposed to?
They are very specific. Perhaps even more specific than conventional drugs that target proteins. This has to do with the exact base pairing in nucleic acids.

And if serious side effects occur: Can the RNA be recovered?
We don’t know exactly yet. So far, it hasn’t been necessary because the mRNA quickly disappears from the body again. But we will have to think about something for the future. So far, it is only a research idea to create depots with replacement proteins in the body. But if this succeeds, we must of course have protective mechanisms ready in case of incompatibilities. However, I do not see a problem in principle, because an antidote could also be designed here. For example, an anti-CRISPR-Cas molecule that is administered on demand.

Unlike today’s drugs, RNA is very unstable. How do you prevent it from rapidly decaying in the body and becoming ineffective?
To do that, you have to change its chemical structure. The mRNA vaccine again provides a fitting example. The fact that it works so well is thanks to biochemist Katalin Karikó. Together with immunologist Drew Weissmann, she incorporated a variant of the base uridine, pseudouridine, into the mRNA well in advance. This not only makes the molecule more stable and efficient, it also reduces the risk of immune system overreactions.

A pioneering achievement that made the saving vaccines possible in the first place?
Yes, and certainly worthy of a Nobel Prize. If you contrast experiments with non-modified mRNA, it shows that it can’t be done without this modification. That’s the reason why some other vaccine candidates have failed so far.

Let’s clarify a few technical issues. RNA molecules are large and very negatively charged. How do you get them where you want them in the body?
In the case of mRNA vaccination, this works very well: the vaccine injected into the upper arm muscle is taken up by certain immune cells in the muscle and from there leads directly to an immune response. However, as already mentioned, depots near target organs such as the lungs, liver or kidneys are also being considered. Sprays are also under discussion. Overall, this is a big research topic right now. Compliance is also always important: How well is the therapy accepted by patients and how do they stick to it – all this plays a role.

Today, RNA molecules are mainly packaged in lipids in order to smuggle them into the cells. Is this the best method?
At present, yes. Nanocages, which can be thought of as cages made of DNA for transporting RNA, are also being tested. The most important thing is to protect the comparatively large RNA molecules from attacks by the immune system and degradation by enzymes – all methods must be measured against these criteria.

How long does the effect of RNA therapy last?
That depends on the technology. In mRNA therapy, similar to Corona vaccination, the protein is produced for a few days after administration – after which the mRNA is degraded. The protein, in turn, can exist in the body for days to weeks and exert its effect until it is then also degraded. For example, in the treatment of spinal muscular atrophy SMA, the drugs that promote mRNA maturation must be given every two to four months.

How far along is testing in humans?
Among the most advanced is a CRISPR-Cas trial of an RNA agent to treat the inherited disease beta-thalassemia. Until now, patients have required regular blood transfusions. If the new therapy proves successful, that will no longer be necessary. Then their bodies will produce the missing hemoglobin. New mRNA-based vaccines are also undergoing clinical trials, for example against influenza or malaria.

At the anaerobic workbench in the laboratory of the Helmholtz Institute for Infection Research with Professor Jörg Vogel (left).

Why has RNA medicine only now become a big topic?
It took the pandemic to build up pressure. It provided the necessary push and showed that mRNA vaccines and RNA medicine as a whole are effective and safe.

You are considered a pioneer in RNA medicine. What brought you in this direction?
I studied biochemistry and worked in molecular biology laboratories as a student, including in plant genetics. I then also did my doctorate there, on molecular mechanisms of catalytic RNA molecules in barley chloroplasts.

You have headed the Helmholtz Institute for RNA-based Infection Research for more than five years. Where do you stand today? The institute has developed magnificently, in parallel with the growing importance of RNA research. When we started out, the topic of vaccines was still primarily thought of as proteins as active agents, not RNA. That has changed dramatically in recent years. Today, innovations are expected primarily from RNA research. At our institute, we benefit greatly from high-throughput sequencing: This allows us to look inside the cells as if with a microscope and see which RNA is currently being produced. Meanwhile, we’re also pretty good at modifying RNA to make it medically useful.

Is medical utility a big issue with you?
When it comes to new approaches, yes. But we are basic researchers. Further development is a matter for industry.

Does your institute work with pharmaceutical companies?
So far, hardly at all, but that is set to change. We are currently preparing the first spin-off. It involves RNA-based diagnostics and tests that can detect many different pathogens simultaneously.

There is still no cure for the common cold. Will RNA medicine be able to cope with it?
Why not? We already have ideas!

Jörg Vogel is Professor of Molecular Infection Biology and founding director of the Helmholtz Institute for RNA-based Infection Research (HIRI) in Würzburg. The institute is operated as a site of the Braunschweig Helmholtz Centre for Infection Research together with the University of Würzburg. It is the world’s first institute to bring together RNA biology and infection research. In parallel, Jörg Vogel heads the Institute for Molecular Infection Biology at the University of Würzburg. In 2017, he received the Leibniz Prize of the German Research Foundation for his work on RNA biology.

As mRNA, ribonucleic acid (RNA) ensures that the information stored in DNA is converted into the proteins necessary for life. Other RNA classes regulate the activity of genes or have catalytic functions. RNA is similar in structure to DNA. Unlike DNA, it is usually single-stranded, which makes it less stable but also more chemically versatile than DNA. Chemical evolution on earth began with RNA – all organisms probably evolved from it.