“There is no better life”

“There is no better life”

He is an internationally renowned cardiovascular researcher, highly decorated science manager – and former GDNÄ president: In an interview, Detlev Ganten talks about his years as a West German in an East German institute, the upswing in science and his plans for the third half of his life.

Professor Ganten, you have just stepped down as president of the World Health Summit, your new non-fiction book will soon be published and in between you are involved in the Berlin Year of Science 2021. Your eightieth birthday is coming up soon – will you find time to celebrate it at all?
You always have time for everything you consider important. And celebrating with friends, whatever the occasion, has always been very important in my life. I hope this special time with COVID-19 allows for joyful celebrations among friends and colleagues.

At a time when many are taking it easy professionally, you have hardly reduced your heavy pace. What drives you?
The joy of the task. Scientists have the inestimably great privilege of choosing their own tasks. There is no better life. In addition, there is the hope that one might be able to research and realise something significant.

You have been in the German science system for a long time and know it from very different perspectives: as a pharmacology professor in Heidelberg and as founding director of the Max Delbrück Centre for Molecular Medicine in eastern Berlin, as chairman of the board of the Helmholtz Association and as head of the Charité, to name just a few of your stations. How has the system changed during this time?
Fortunately, many things have improved. In the last fifty years, Germany has reconnected with its great scientific tradition. In the post-war years, economic reconstruction initially took priority.  Research and science didn’t really get going again until the 1970s, and reunification brought another considerable boost. The financial support was good and reliable. In the meantime, the “pillarization” of science, i.e. the separation of universities and non-university research institutions, is no longer as pronounced as it used to be; the system has become more permeable. When it comes to scientific productivity, Germany now ranks fourth in an international comparison. Overall, the country has once again developed into a very good, attractive science location. 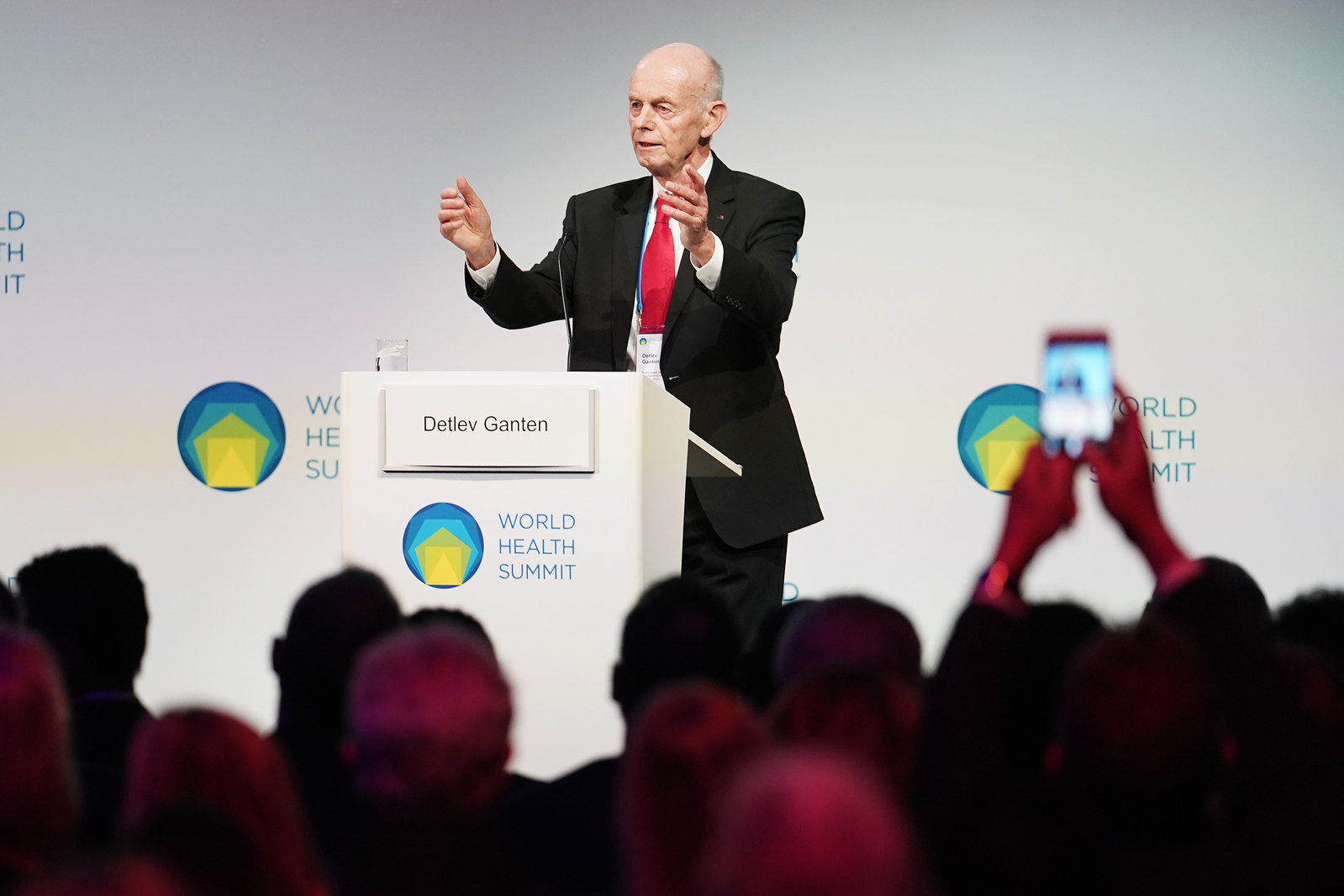 Welcome to Berlin: At the World Health Summit, founding president Detlev Ganten welcomed thousands of experts from politics and healthcare to the German capital every year between 2009 and 2020.

You left tranquil Heidelberg in 1991 to set up the Max Delbrück Centre for Molecular Medicine in the eastern part of Berlin. A big step, both personally and professionally. How did you approach the new task?
After my appointment as founding director on 5 September 1991, I immediately went to Berlin-Buch to introduce myself personally. There was a tense atmosphere, the approximately 2500 staff members were very unsettled at that time. In their eyes, I was the unknown Westerner with the task of forming something new out of the three central institutes of the Academy of Sciences of the GDR on site. This naturally aroused mistrust, but at the same time I sensed a great willingness to seize the opportunity of peaceful reunification, which had its origins in East Germany, and to walk a new path together. For a few weeks I then had conversations practically around the clock. My office was open to all staff members at all times, in the evenings we had Flensburg beer or red wine and so we also got to know each other better personally. In this open atmosphere, common concepts emerged and a spirit of optimism gripped everyone, releasing an incredible creativity. In 1992, we were able to ceremoniously found the Max Delbrück Center for Molecular Medicine (MDC) Berlin-Buch – the then Federal President Richard von Weizsäcker also came to the ceremony. I stayed at the MDC for twelve years. Professionally and personally, it was one of the most challenging and formative times of my life.

Flensburg beer and red wine have certainly contributed to this: but what was it at the core that changed the minds of your initially sceptical staff? In other words: How did mistrust turn into a spirit of optimism?
Mutual respect and listening were important. At the beginning, I didn’t know exactly what the path would look like and was dependent on finding it together. I told my staff and colleagues that openly and that released enormous energy: Everyone wanted to contribute to the success, even the administration, which is often so often scolded by scientists. In addition, there is the unique history of the location with its world-famous Kaiser Wilhelm Institutes and later with the biomedical complex around the Academy Institutes of the GDR – Buch had always been known for scientific quality. My Colleagues there were very aware of this tradition and it became a source of strength for me, too. What contributed greatly to our success were the great freedoms we enjoyed during the reconstruction years: Politics gave us a lot of leeway in our decisions.

The MDC was to become a new-style research institution. Did it succeed?
I think so – but that’s for others to judge. Our concept of using research into basic molecular principles and basic cellular mechanisms together with clinicians to gain a better understanding of health and disease has proved successful. With flat hierarchies, many independent, young working groups and the opportunity to apply for third-party funding from the German Research Foundation and other funding bodies, we have created a modern, attractive, agile MDC. We have also ensured that results from basic research can quickly benefit patients and be used economically. The cooperation with Charité Universitätsmedizin Berlin works extremely well.  A biotechnology campus has been established right next to the research labs, which is now one of the most important in Germany.

During your time as MDC director, you took on many additional tasks: More or less in parallel, you were a member of the Science Council, president of the Helmholtz Association and, from 1996 to 1998, also president of the GDNÄ. How did this plethora of offices come about?
I took on these additional tasks because they enabled new synergies for the development of the MDC. The renewal of the consortium of major research institutions into the Helmholtz Association was a blessing for us and for the whole of German health research. And the presidency of the highly respected GDNÄ I felt was a tribute to the new MDC.

Your term of office included the 175th birthday of the GDNÄ, which was celebrated with a large symposium in Lübeck. What comes to mind when you think back?
The wonderful, convivial, collegial atmosphere, the great guests. The tradition, the lively spirit and the selected lectures at the highest level: that still shapes my image of the GDNÄ today. The historian of science Dietrich von Engelhardt had prepared the conference and it went off brilliantly. I have very fond memories of the participation of the then Bundestag President Rita Süssmuth. Practically all the presidents of the major German science organisations came and new friendships were formed. Virchow, Helmholtz, the Humboldts – they would have enjoyed this conference.

A year later, in 1998, you hosted the 120th meeting of the GDNÄ in Berlin. It was entitled “Information World – Our Worlds of Information” – what exactly was it about?
One focus, for example, was genome research. New methods of gene sequencing in model organisms and humans resulted in a previously unknown amount of data with new possibilities in molecular medicine.  At the end of the 1990s, the opportunities and risks were discussed intensively worldwide. At that time, Germany was in a process of self-discovery, it was a time of upheaval. After reunification, Berlin became the seat of the Federal Government in 1999.  At that time, the new corporate identity of the nation was at stake: “Greater Germany” or “Land of Poets and Thinkers” – the public debate oscillated between these poles. Against this backdrop, Berlin as a kind of laboratory of reunification was naturally an excellent place for the meeting.

Meanwhile, preparations are underway for the 200th anniversary of the GDNÄ in 2022. How do you see the future of the tradition-rich society?
The interdisciplinary exchange among scientists and with the public – that is, after all, the GDNÄ’s brand essence – is more important today than ever. Other scientific institutions are now also organising large conferences with public components, I’m thinking of the Leibniz Association, the Max Planck Society or the Leopoldina and the state academies, for example. That is a good development.  What distinguishes the GDNÄ from other science organisations, however, is that it has teachers, students and interested citizens as members. My suggestion would be to go outwards even more in the future: with high-quality offers for the members and strong impulses into society. I see a great need there and I am very happy to contribute to such initiatives. 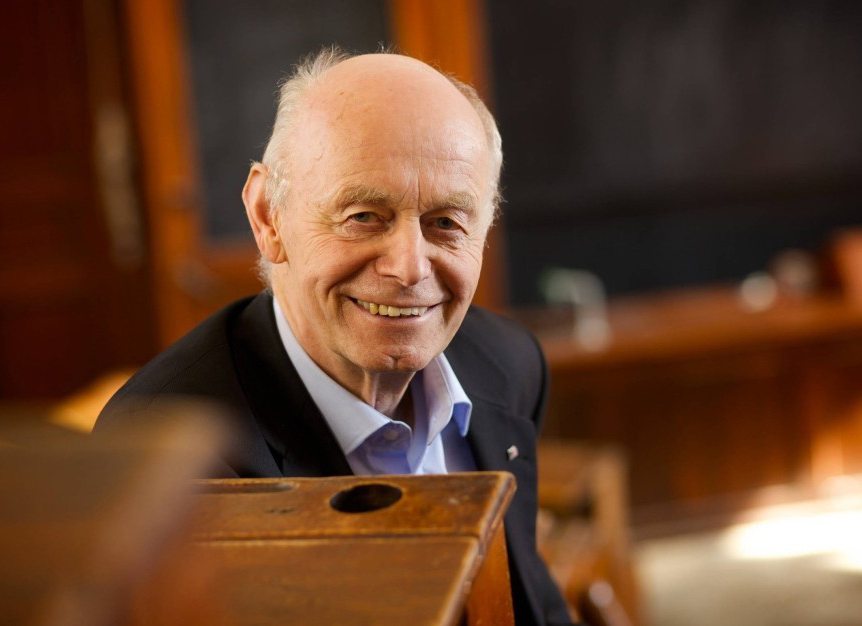 Professor Detlev Ganten was born in Lüneburg in March 1941. He studied medicine in Würzburg, Montpellier and Tübingen and earned the title “Philosophical Doctor, PhD” at McGill University in Montreal/Canada. In 1973 he returned to Germany to take up a professorship at the Pharmacological Institute of the University of Heidelberg. After the fall of the Berlin Wall, he was appointed founding director of the Max Delbrück Center for Molecular Medicine (MDC) in Berlin-Buch in 1991. From 2004 to 2008, Ganten was Chairman of the Board of Charité – Universitätsmedizin Berlin. From 1993 to 1998 he served as a member of the Science Council and from 1997 to 2001 as Chairman of the Helmholtz Association. From 2002 to 2007 Detlev Ganten was a member of the National Ethics Council, from 1992 to 1998 President of the World Hypertension League and from 1996 to 1998 President of the Society of German Natural Scientists and Physicians. From 2009 to 2020, he chaired the World Health Summit as its founding president.

Hypertension research is Ganten’s main scientific focus. He has received numerous honours in Germany and abroad for his achievements, including the Max Planck Research Prize in 1990, the Japanese Okamoto Prize and the CIBA Prize of the Council for High Blood Pressure Research of the American Heart Association (1992). He has been awarded honorary doctorates from several universities at home and abroad. In 1997 he was awarded the Order of Merit of the State of Berlin, in 2000 the Federal Cross of Merit and in 2003 he was made a Knight of the French Legion of Honour. Ganten is a member of the German Academy of Sciences Leopoldina, the Berlin-Brandenburg Academy of Sciences and Humanities and other academies.

In addition to his scientific publications, Detlev Ganten is (co-)author of several popular science books: “Leben, Natur, Wissenschaft: Alles, was man wissen muss” (2005), “Die Steinzeit steckt uns in den Knochen” (2009) and “Die Gesundheitsformel” (2014). His new book, a double biography on Hermann von Helmholtz and Rudolf Virchow written together with Ernst Fischer, will be published in 2021 under the title “Die Idee des Humanen”.

Masters of their field: In front of the MDC’s central building in Berlin-Buch, a bust commemorates the geneticist, biophysicist and Nobel laureate Max Delbrück, who conducted research in Berlin until 1937 and then emigrated to the USA.

>> Detlev Ganten in a video interview