Jürgen Tautz has been with the GDNÄ since his doctoral thesis, he only came to bee research much later. To this day, the zoologist, beekeeper and well-known non-fiction author is fascinated by the way these insects communicate with each other.

Professor Tautz, how are the bees doing?
Not so bad, at least not in Germany. In this country there are about one million bee colonies and around one hundred thousand beekeepers. The beekeepers are growing from year to year and they are becoming younger, more feminine and more urban. In the last ten years bees have become extremely popular animals and now they have a strong lobby worldwide – much stronger than other insects.

But surely this has a lot to do with the death of bees?
There is no such thing as a generalised bee mortality. We have to deal with threats that vary greatly from region to region, for example from parasites like the Varroa mite, diseases or a lack of flowering plants. This threatens above all the numerous lesser-known wild bee species, which do not form states but live predominantly solitary lives. The western honeybee, which is widespread in our country, is not endangered as long as it is cared for by a committed beekeeper.

What is the effect of herbicides such as glyphosate on bees?
The negative impact of glyphosate and other herbicides is mostly indirect. Glyphosate, for example, damages the bees’ bacterial gut flora, which can ultimately weaken their immune system. In addition, this herbicide reduces the food supply for many insects, since all plants except genetically modified crops are killed. 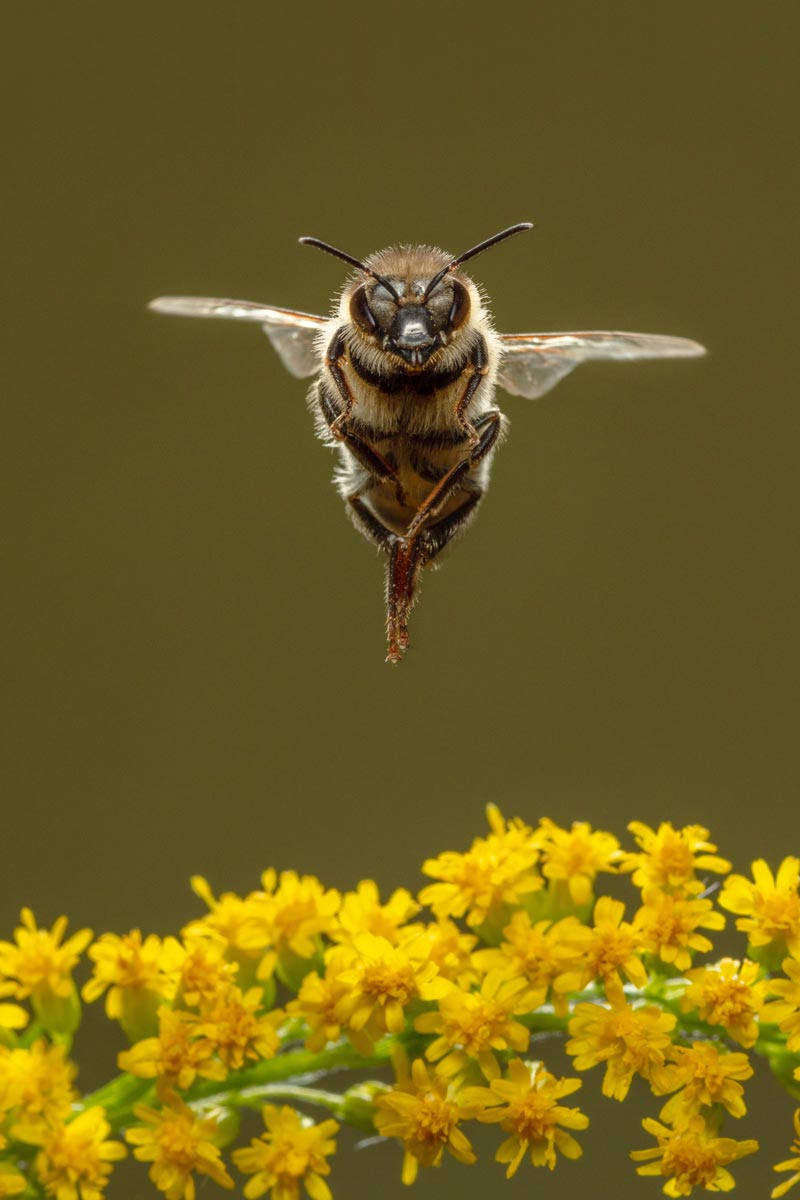 If beetles, ants or hornets suffer as a result, few people are interested. Why is it different for bees?
At first sight this is indeed astonishing. After all, a beehive contains around fifty thousand poisonous stings. But this does not diminish our love for bees. There are historical reasons for this, I think. In all cultures honey is a food of the gods, just think of ambrosia in Greek mythology. For our ancestors it was always a feast when they found a bees’ nest with honey. However, it was not until the end of the 18th century that we realised how important bees are for the natural balance and agriculture. At that time, the Berlin theologian Christian Konrad Sprengel observed that bees pollinate and thus fertilise plants. One can therefore say that bees are a key organism and a wonderful bridge builder between the environment and man.

You are a zoologist. What exactly brought you to bee research?
I only started specialising in this field when I was 45 years old. Before that, my research involved butterfly caterpillars, crabs, frogs, fish and other organisms. But after first insights into the communication biology of bees I was absolutely fascinated and couldn’t get away from it.

What impresses you so much about the bee?
Bees are incredibly resilient and have amazing abilities. The honeybee, for example, can count to four, has an idea of the concept of the number zero and can tell the painting styles of Picasso and Monet apart. This has all been experimentally proven. The cultural history is also fascinating: it was only in the 18th century that it was discovered that a colony of bees was led by a queen and not, as was claimed for thousands of years, by a king. We are actually dealing with a women’s state that functions excellently, not least because of the sophisticated communication between them.

What significance does the dancing language of bees have in this?
It plays an important role, as the research work of Nobel Prize winner Karl von Frisch has already shown. He had observed how worker bees showed their fellow bees the way to food through dance-like movements in the beehive, the so-called tail dance. However, the information provided in this case only provides a rough orientation, as we know today. In order to find the exact feeding place, the honeybee needs further information which it receives during the flight – among other things through constant communication with other bees.

“The importance of the bee dance is overestimated” – You were quoted with this sentence in a daily newspaper years ago, which caused a fierce controversy in the professional world. What do you think about this today?
The controversy would not have been necessary in this form. My view of things has not changed since then: In the bees’ tail wagging dance I see the beginning of a seamless that accurately guides worker bees from the beehive to the food source, supplemented by additional information. This view is supported by many international research results.

You have done a lot for the dialogue with the public and have been awarded the renowned Communicator Prize of the German Research Foundation and the Stifterverband for your excellent communication with the public in 2012. What does this honour mean to you?
It is wonderful to be able to interest and inspire your fellow human beings in things that you yourself consider important. But it also costs resources that are lost in the actual research work. So the Communicator Award is a very motivating recognition.

As a retired professor, you are now primarily involved in educational work in schools. What drives you in this area?
My team and I want to bring young and older people together personally and not just digitally with a modern project. With us, Fridays for Future supporters can do something concrete for the environment and climate. After the positive experience with an online project at the University of Würzburg called Honeybee Online Studies, HOBOS for short, we recently launched a new project with we4bee. The focus here is on high-tech hives for independent environmental research.

How can we imagine school research?
Currently, more than one hundred schools throughout Germany have borrowed such beehives from us. Thanks to a generous sponsor, the Audi Foundation for the Environment, this is free of charge for schools. Each hive houses a colony of bees, whose condition and behaviour is recorded around the clock with cameras and sensors installed in the nest and can be observed via app. In addition, temperature, humidity, weather conditions and other parameters in the surrounding area are documented. The pupils collect all the data and send it to our team at the University of Würzburg for evaluation. What does a bee colony need to stay healthy? And does the new 5G mobile phone network harm the bees? These are some of the questions that we hope to be able to answer better soon using the data. But we don’t just want to discuss the results with young people, we want to bring all generations together in a conversation about bees. Beekeepers should also benefit from this, so that they can create the best possible living conditions for their colonies.

How are your own bees doing and what hopes for the future do you have as a beekeeper?
My own five bee colonies are doing well. For the future, I hope for environmental conditions that are beneficial to the bees as a whole. Then a huge network in nature will be doing well, and ultimately we humans will also be doing well. 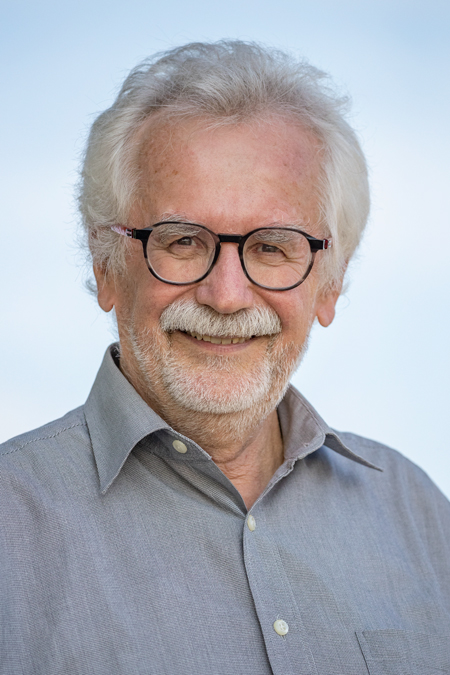 About the person
Jürgen Tautz is a behavioural scientist, bee researcher and beekeeper. Professor emeritus at the Biozentrum of the University of Würzburg in 2015, he now heads we4bee, a network for environmental research and environmental education in schools. We4bee follows on from HOBOS (Honeybee Online Studies), an internet-based teaching and learning platform on the honeybee, which Tautz founded in 2006. Born in Heppenheim in 1949, the zoologist studied biology, geography and physics at Darmstadt Technical University. After completing his dissertation in Konstanz under Hubert Markl, he came to the University of Würzburg in 1990, following stations in Canberra/Australia and Stanford, California. In addition to some 400 scientific publications Jürgen Tautz has published several non-fiction books, including bestsellers such as “The Buzz about Bees – Biology of a Superorganism”. The work, which was first published in 2007 in German, has been translated into twenty languages. Tautz is currently working on a popular science book that looks at the language of bees from a new perspective, to be published in spring 2021. 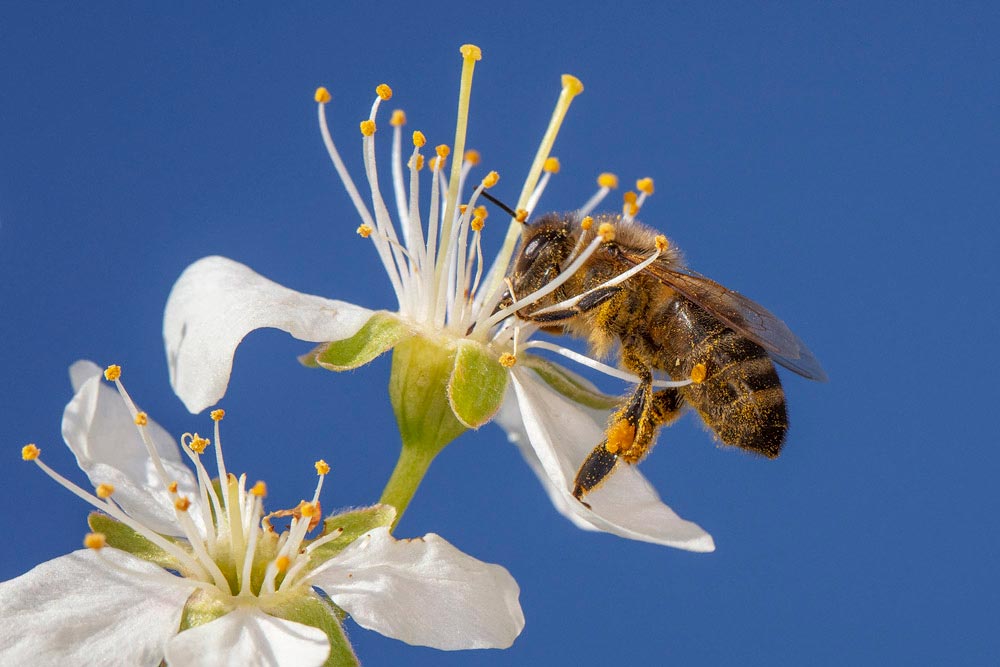 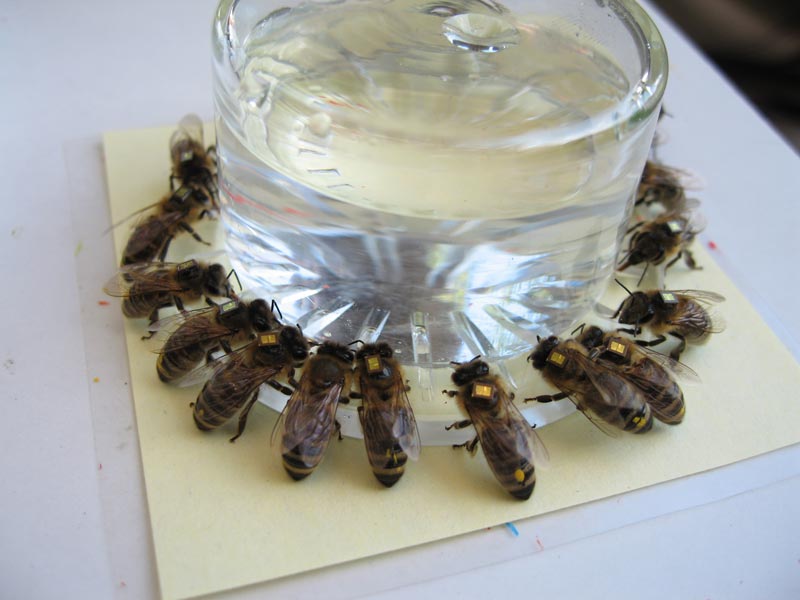 Research at the feeding site: These collecting bees were tagged after birth with an RFID chip that records their flight activity. 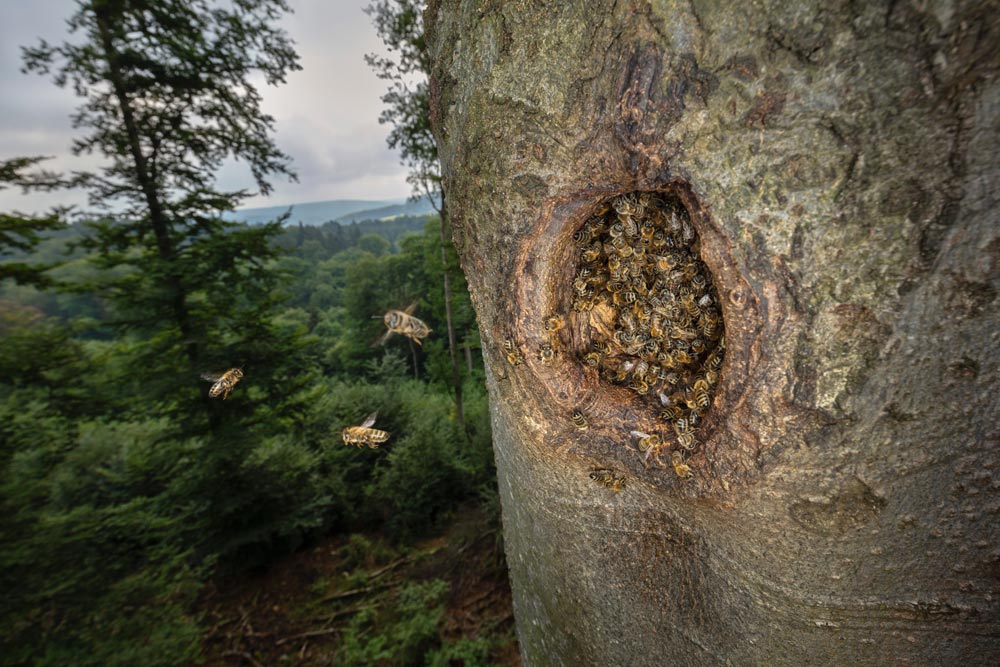 These wild honeybees have found a home in an old black woodpecker cave. Unlike honeybees kept by beekeepers, wild bees are exposed to natural selection. One consequence is that they can adapt flexibly to changing living conditions. 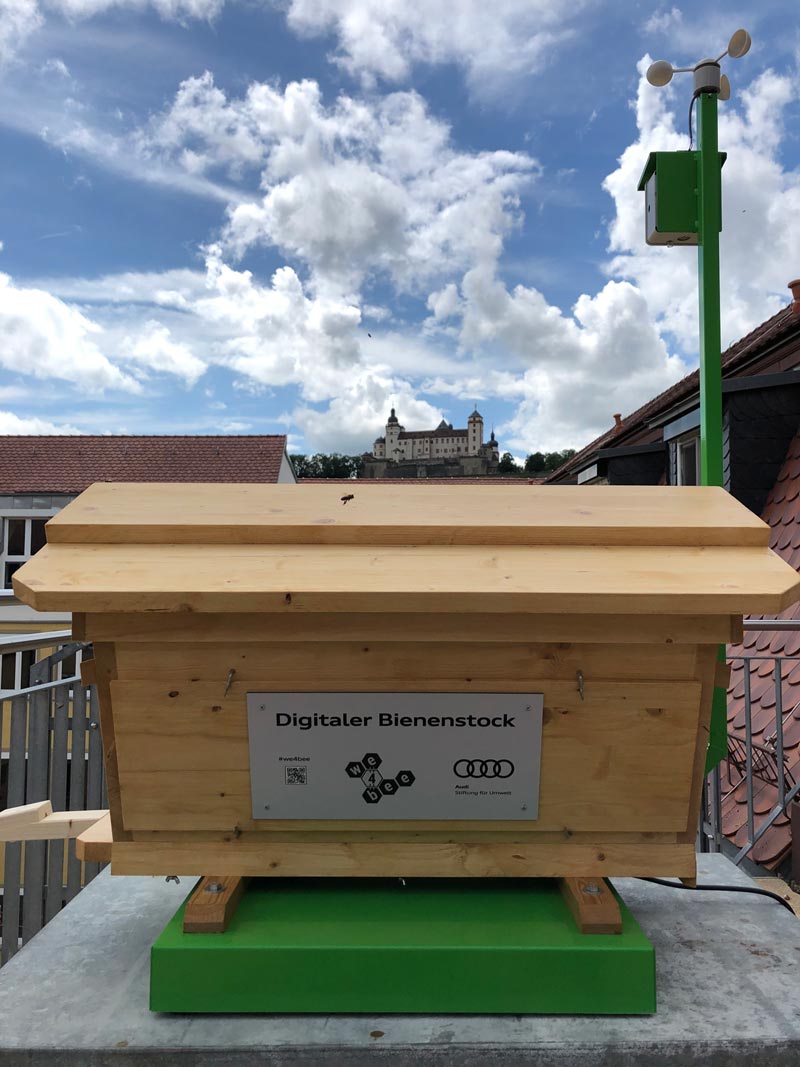 The digital beehive of the St. Ursula School Würzburg: the entrance to the beehive is permanently monitored by a mini video camera. The green box on which the bees stand is a scale. The weather station attached to a mast records temperature, humidity, rain, sunshine, wind and exposure to fine dust. All data (including those from inside the beehive, whose measuring systems are not shown here) are continuously collected at the Institute for Computer Science at the University of Würzburg. There they are analysed, processed and made available on the Internet for all interested parties to access.