Angelika Brandt: “Five weeks without internet is not so bad”

“Five weeks without internet is not so bad”

The deep sea is dark and bitterly cold – and yet it is full of life. Marine biologist Angelika Brandt explores this mysterious world and makes fascinating discoveries time and again.

Professor Brandt, your research is based on journeys to distant ocean regions. Where have you already been on expeditions?
Many of my research trips were to the Polar Regions. I have been to Antarctica ten times and to the European Northern Seas and the Northwest Pacific eight times – always for several weeks.

Are such research trips also possible in Corona times?
They are not impossible. A current example is: After a long back and forth with permits, logistics, visas and all the health precautions, we finally got the green light for a German-Russian expedition to the Bering Sea a few weeks ago. The application has been done in 2016, and the expedition was supposed to start on 4 June in Petropavlovsk Kamchatsky on the Kamchatka Peninsula and last until 12 July. There are now technical problems at short notice. It would be a miracle for us to be able to leave after all. Research expeditions are enormously complex undertakings, something can always come up – and the susceptibility to breakdowns naturally increases in times of pandemic. 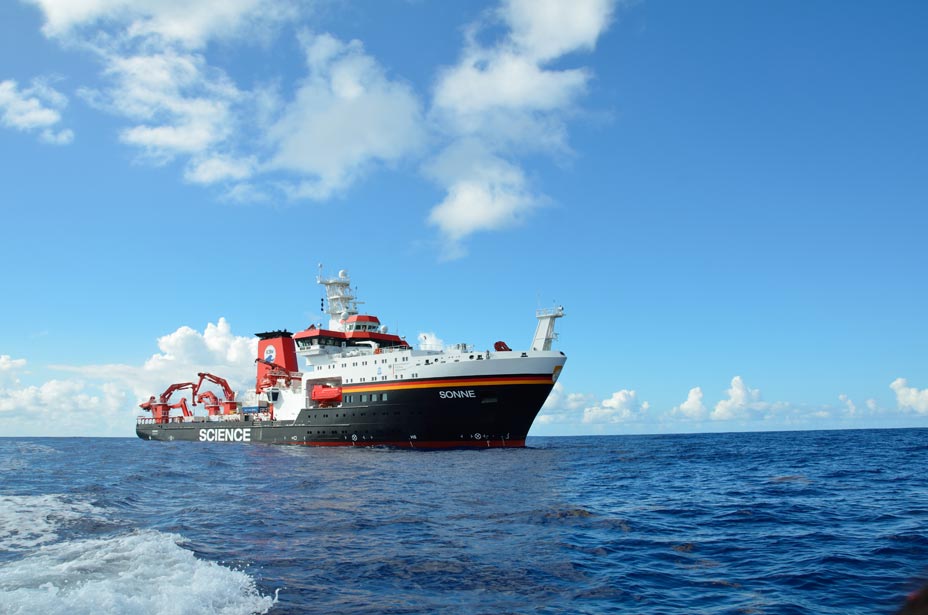 And if the expedition remains cancelled?
Then the German-Russian research expedition will be postponed for an uncertain period of time. For the time being, we can only hope for the next expedition. It will take place in 2022 with the German deep-sea research vessel Sonne under my command in the North Pacific Aleutian Trench.

What significance do the expeditions have for your work?
They provide the basis for our research work. We usually bring home very extensive animal material and initial data from an expedition that lasts several weeks. In our laboratories, we then subject the samples to elaborate morphological, anatomical and genetic analyses. This has already resulted in many doctoral theses and publications with widely respected discoveries and findings.

Do you have an example for us?
In the Northwest Pacific, we were able to identify hundreds of previously unknown species in the deep sea. At a depth of 8700 metres, for example, we discovered a shell crab that had previously only been known from depths of around 4000 metres. The discovery was also so surprising because it had been assumed that these animals could not exist under the enormous water pressure in the hadal – as we call the sphere from 6000 metres below sea level. A mistake, as our expeditions show.

What is the overall environment like for living creatures at these depths?
Below 1000 metres it is pretty dark, the temperature is usually one to two degrees Celsius, there is a pressure of more than a ton on every square centimetre and the food supply is meagre. And yet, rich biotic communities can be found in the deep sea. Species numbers usually increase down to depths of 4000 metres, and decrease again in deep-sea trenches from 6000 metres. The species present at great depths are often gigantic. We were able to observe this trend towards gigantism with increasing depth in the Northwest Pacific Kuril-Kamchatka Trench as well as in the Southern Ocean. 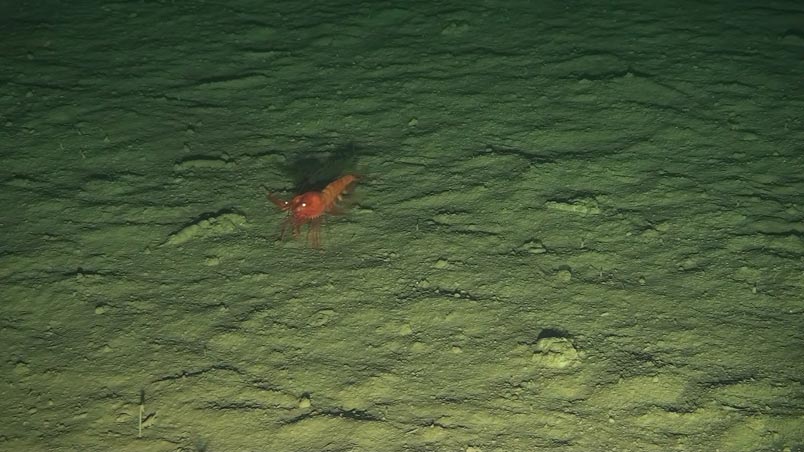 Deep-sea shrimp in the Northwest Pacific Ocean at a depth of 5378 metres.

You already mentioned ostracods: what other species are there down there?
Bristle worms, hooked weevils, furrowed feet, sea cucumbers – and always marine isopods. They are my favourite species and they are even still found in the deepest ocean trenches, more than ten kilometres below sea level. One of our particularly interesting finds in the Northwest Pacific was a living fossil. I published a first inventory of biodiversity in the Northwest Pacific in 2020 together with colleagues from around forty countries. In our online Deep Sea Atlas, we describe more than 500 deep-sea species that we found during four expeditions in this region.

What makes the Northwest Pacific so interesting for your research?
It is one of the most fertile, nutrient-rich and species-rich oceans in the world. It has sea basins of varying depths and interconnected or isolated habitats such as the Sea of Japan and the Sea of Okhotsk. Moreover, there are excellent comparative data for these regions, which we owe to eleven Russian expeditions with the research vessel Vityas between 1950 and 1977. Against this background, we can identify changes in biodiversity over the decades and explore connections: for example, with climate change or certain human activities.

What changes are you observing and how can they be explained?
We recently compiled our findings on the fauna of the Northwest Pacific and published them in a scientific journal in 2020. They confirm what research has been showing for years: In the oceans, climate change in particular is causing major upheavals: The water is getting warmer, ice shelves are melting, sea levels are rising and ocean currents are changing. All this has consequences for the food web and the living environment in the ocean. We are seeing rapid changes in the Arctic Ocean. Many species are migrating there from more southerly regions, for example crustaceans and molluscs. Conversely, numerous species are also migrating southwards from the Arctic Ocean. In the Southern Ocean, too, great changes have begun. The melting of huge ice shelves is freeing up habitat for new species. For other species, food is becoming scarce. This has to do with the algae that grow under the ice and on which krill, for example, feed. These are tiny crustaceans found in huge quantities, which in turn serve as the main food for whales, seals, penguins and many other species. So less sea ice means less algae, less krill and less large fauna. Antarctic wildlife will soon be different, we are convinced.

And what will happen then?
That is one of the big research questions that our expeditions are about.

How do you get the samples you need for your observations?
With trawls, for example with the so-called Agassiztrawl, or with epibenthic sleds. These are collection devices that are pulled over the bottom to pick up the organisms in the deep-sea mud. We also often use grab systems that punch out pieces from the seabed. With the help of a large box grab, for example, we can bring a quarter of a square metre of sediment from the ocean floor with the organisms in it onto the deck. By the way, even in the most remote ocean regions there is always a lot of plastic waste: drift nets, bags, shoe soles, pillboxes and a lot of microplastic that accumulates even at depths of more than 9000 metres. 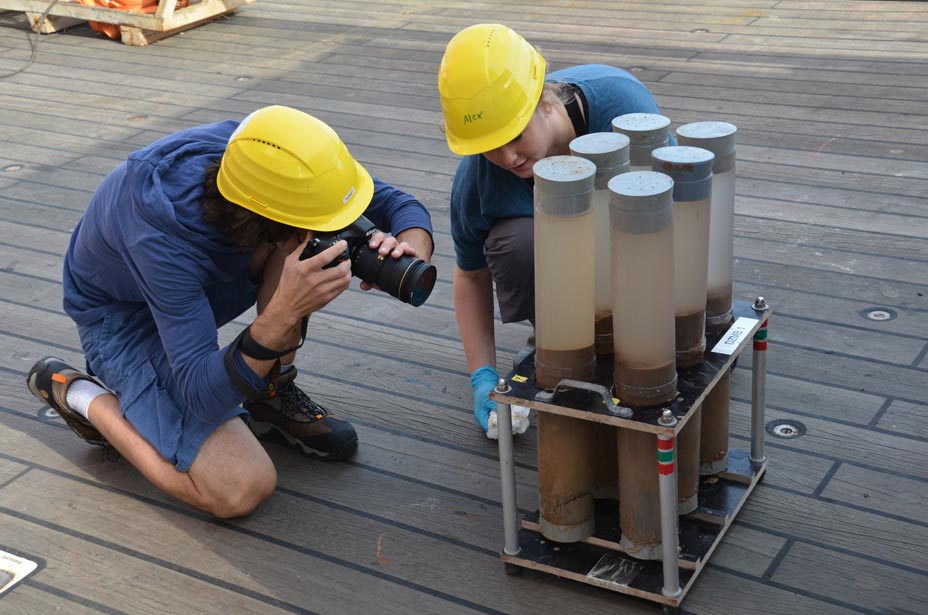 Ready for scientific examination: sediment cores from the seabed.

How can we imagine everyday life on board a research vessel?
(Angelika Brandt laughs): You work all the time and fall into bed leaden at night. At most, I only have enough energy for a few pages of my favourite crime novel. While one shift is sleeping, the other is on deck taking rehearsals – that goes on around the clock and is quite exhausting. Most of the time we have no or very poor internet connection. Consequently, there are no video conferences and the like. For a few weeks, that’s not so bad. The seclusion, the concentrated research always do me good personally. Together with the crew, usually around seventy of us, I make sure that samples are taken from the sea, sorted, preserved and carefully prepared for later analysis. Back in the harbour, the material is then packed into refrigerated containers and taken to the local laboratories.

How do international crews manage to work together in a small space?
Everyone has their own research questions, but they all pull together and pursue a common overarching goal. For example, it’s about changes in the fauna of a marine region against the background of global change. This can be researched on different groups of animals and with a wide variety of methods. Ideally, experts are on board for as many as possible, but especially for the most common groups of organisms such as nematodes, crustaceans, molluscs and echinoderms. We try to recruit the best from all over the world and communicate with each other in English. 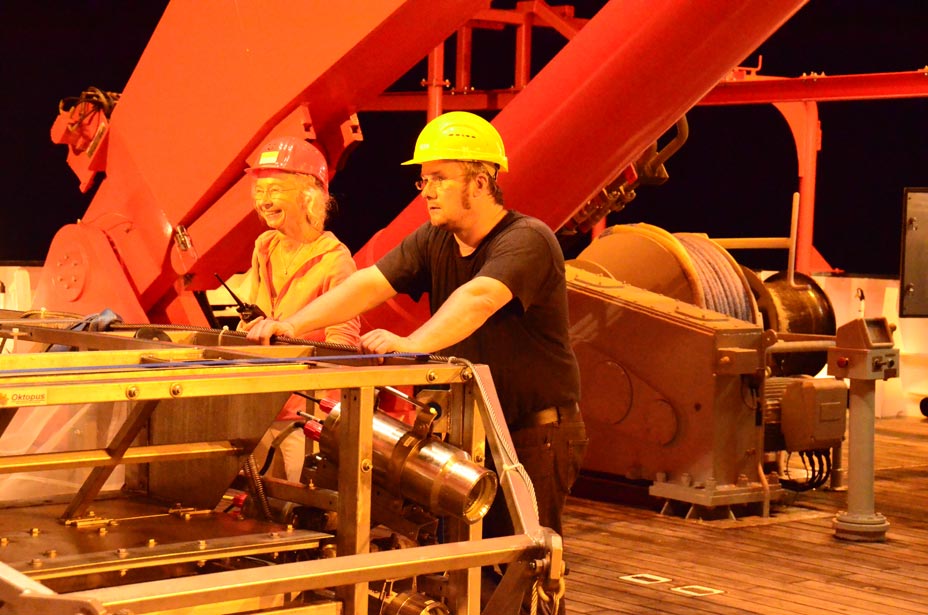 Deep-sea expeditions work in shifts – every weekend and also at night.

The UN Decade of Ocean Exploration 2021-2030 has just begun. What are your hopes for it?
That we will gain a better understanding of the ecosystem functions of marine biodiversity, including its importance for humans.  This is the only way we can avert the dangers to marine biodiversity. I see a major risk in deep-sea mining, which can probably hardly be prevented. Along with the sediment in which valuable raw materials are stored, many species are also removed in large quantities and biotic communities are being destroyed. It would be better not to allow much of what is currently being considered in the first place. If it does take place, very careful biological monitoring is essential.

You have been in the GDNÄ for about thirty years. What does it mean to you?
Even as a doctoral student, I was fascinated by the great tradition of the GDNÄ and its scientific diversity. So far I have not been very involved, but that is changing. As group chair of biology, and specifically as a representative of marine research, I will help shape the 2022 anniversary conference.

What is important to you?
Sophisticated, up-to-date, easy-to-understand lectures and lively discussions. And an exciting programme for schoolchildren. I think it’s great that the GDNÄ is so broadly positioned, does a lot for young people and is not elitist at all.

Finally, please take a look into the crystal ball: How do you see the future of the GDNÄ?
In my field of research, we think in large time frames. Due to its scientific breadth and topicality, I would say: the GDNÄ will still exist in 500 years! 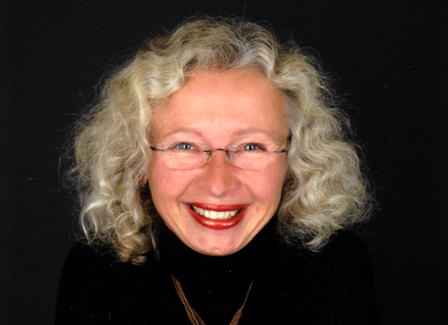 About the person
Marine biologist Prof. Dr. Angelika Brandt heads the Department of Marine Zoology at the Senckenberg Research Institute and Natural History Museum in Frankfurt. Her research focuses on the macrofauna of the deep sea and polar regions. Born in Minden in 1961, the scientist came to marine research via studies in biology and education. In 1991, she received her doctorate from the University of Kiel with a thesis on the colonisation history of the Antarctic shelf and was appointed to a professorship for special zoology at the University of Hamburg in 1995. From 2004 to 2009, she was director of the Zoological Museum at the University of Hamburg. In 2017, she moved to the Senckenberg Museum in Frankfurt am Main. There she simultaneously holds a professorship in marine zoology at the Goethe University.

Angelika Brandt organised and led numerous expeditions with research ships. She reported on her discoveries and findings on deep-sea biology in renowned journals. A Nature publication on biodiversity in the Southern Ocean was named one of the most important scientific discoveries of 2007 by Time Magazine. Brandt received the National Geographic Society’s Adventurer of the Year 2007 Award and the SCAR Medal for Excellence in Polar Science. 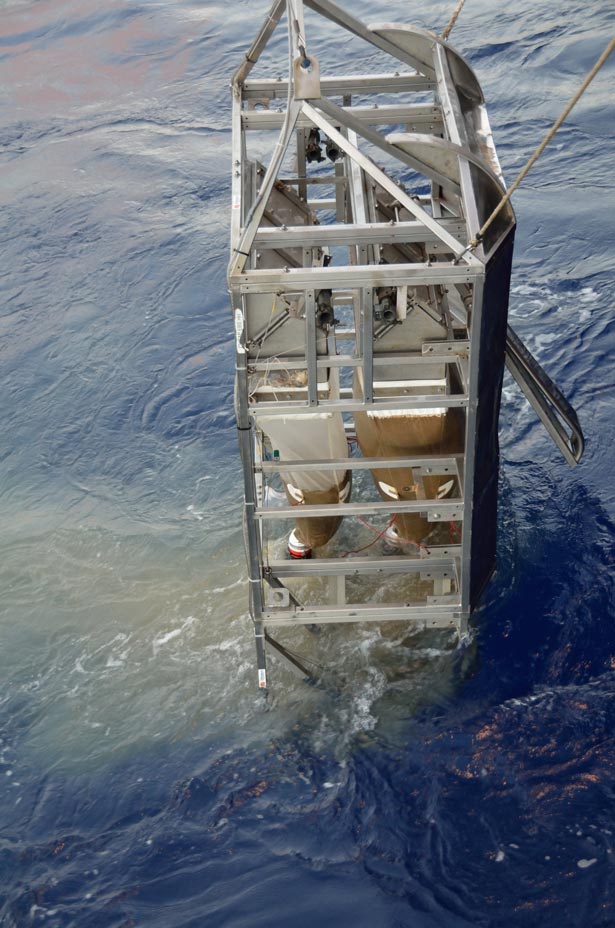 An epibenthic sledge is hoisted on board. The collection device had been trawled over the sea floor and brings organisms and a lot of deep-sea mud on deck for scientific research. 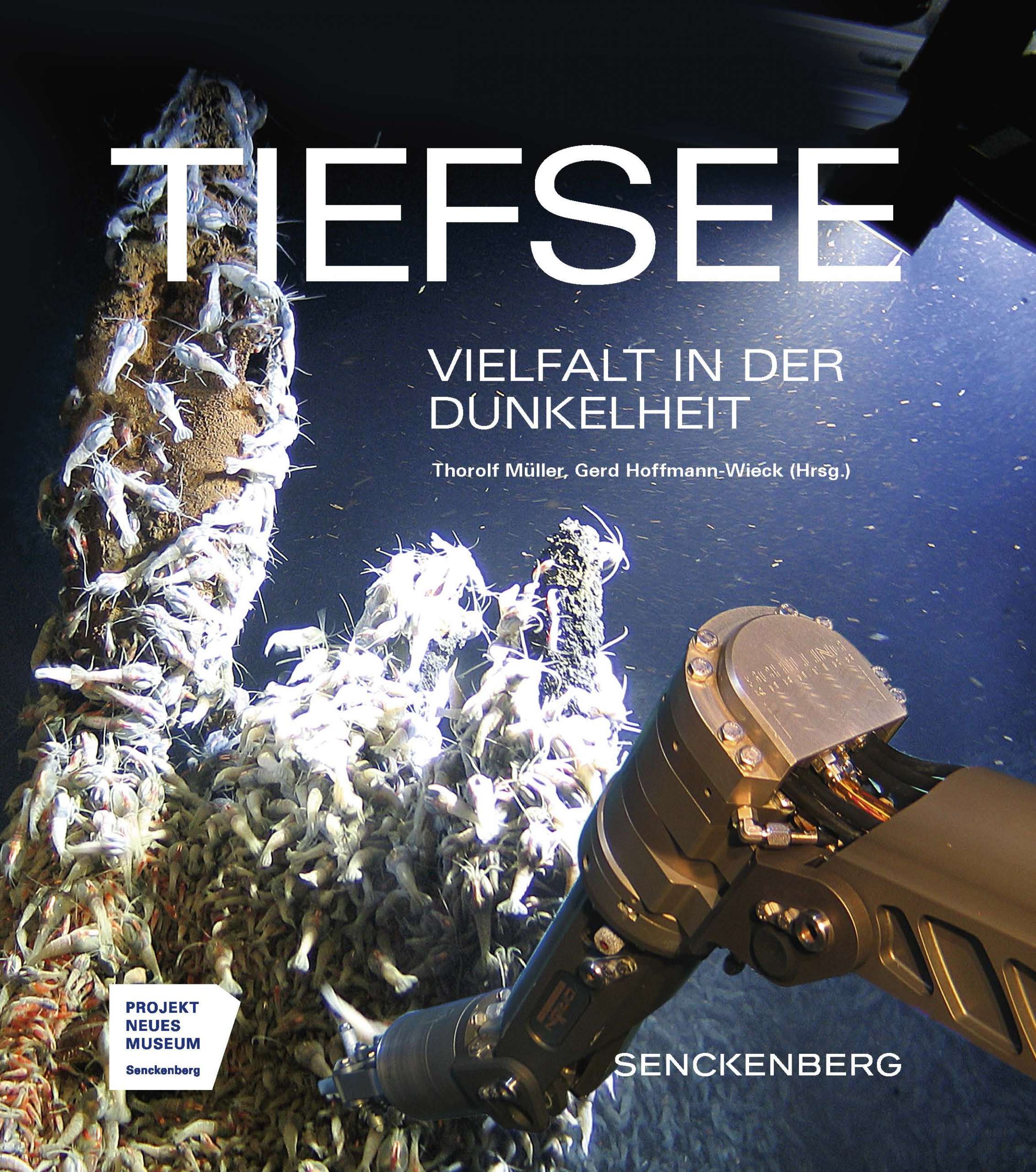 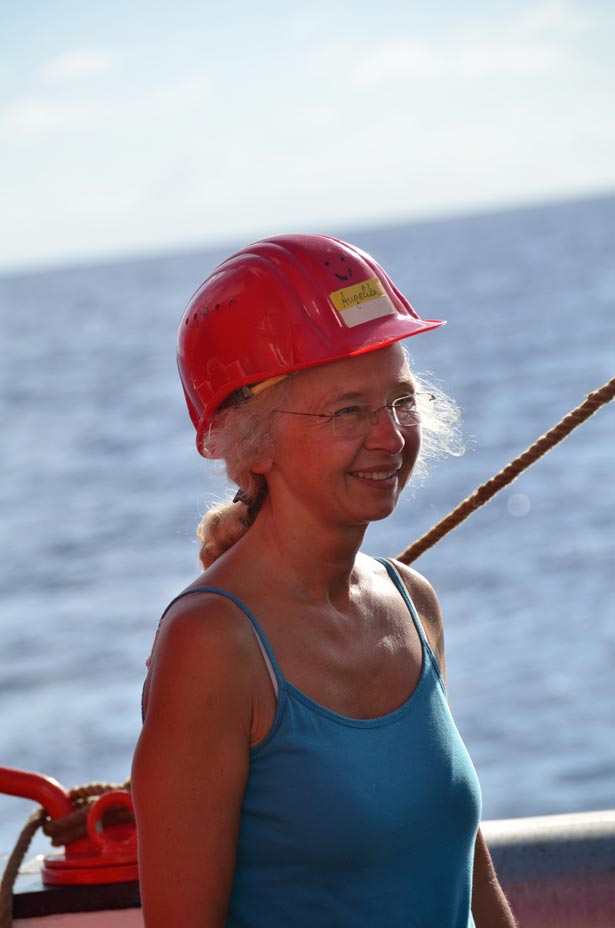 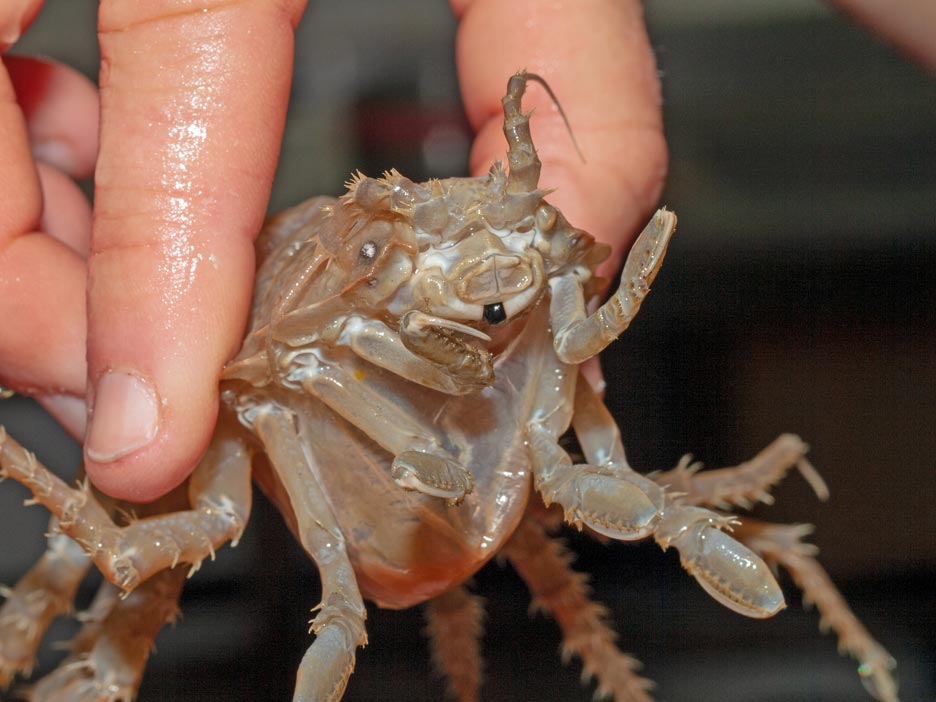 The predatory isopod Glyptonotus antarcticus grows up to 17 centimetres.