Katharina Kohse-Höinghaus: We should always consider the climate

“We should always consider the climate”

Katharina Kohse-Höinghaus, Professor of Chemistry at Bielefeld University, on smart strategies for energy system transformation, China as a research nation and female scientists in male domains

Professor Kohse-Höinghaus, you are committed to a consistent energy system transformation – in Germany and internationally. What motivates you?
The obvious climate change. It will lead to global distortions if we do not vehemently change course and ensure that much fewer greenhouse gases are released as soon as possible. To achieve this, we need to restructure all sectors of the energy system, not only energy supply, but also industry, mobility and building services engineering.

In Corona times, climate change has been pushed into the background somewhat. Is the issue still receiving sufficient attention from politicians and society?
It is a priority of the German EU Council Presidency, the European Green Deal is still valid and climate change is by no means forgotten in society either. We should now always consider climate protection in everything we do to counter the economic consequences of the pandemic. It is possible that the corona crisis will lead to a new awareness of creeping dangers, one of which is climate change. That would be a good learning effect.

The European Green Deal could make Europe the first continent to become climate neutral. How can this goal best be achieved?
By cleverly combining local solutions, for example in local transport, and at the same time sticking to the big visions. The goal must be a climate-neutral circular economy. We should proceed step by step and start quickly.

Starting quickly sounds good. But where first and how?
An important contribution can be made by chemical energy sources that are synthesized using renewable energies and are therefore considerably more climate-friendly than fossil fuels such as natural gas, oil or coal. For example, fossil methane in gas-fired power plants can be gradually replaced by synthetic methane and then by methane/hydrogen mixtures. Such chemical energy sources have major advantages: they can be used within the existing infrastructure, they can balance out fluctuations in sun and wind, and they are ideal storage media. Synthetic fuels will also be available for cars, aircraft and ships.

But we cannot be satisfied with this.
That is true. In order to improve the climate balance, not only technological but also social and political aspects must be considered. A great deal will depend on whether we manage to reliably assess technologies in terms of their impact on climate and whether we can take an open-minded approach to energy system transformation. For example, it already makes sense to use carbon dioxide from industrial processes as a resource. It is ideally suited for the production of carbon-containing synthetic chemical energy sources using renewable energies. Carbon-free chemical energy carriers – such as hydrogen, ammonia and possibly even metals – are also interesting for the future. In the short and medium term, however, rapidly available synthetic chemical energy carriers are important. They provide us with a breathing space that we can use to also transform our infrastructure for a sustainable future. One way to achieve this is outlined in the position paper “Energiewende: verlässlich, machbar, technologieoffen” (Energy system transformation: reliable, feasible, open to all possible technologjes), which I emphatically support.

The Federal Government’s hydrogen strategy also aims at a carbon-free future. What do you think of the initiative?
I think it is a very good approach. We just have to make sure that it really is green hydrogen produced by using wind and solar energy. There are certainly not enough resources I our country to meet the demand. But in some southern regions of the world there is great potential for wind and solar energy – just think of Spain or North Africa. One challenge now is to establish long-term, reliable partnerships with the relevant countries, especially since we are not the only ones who want to harvest sun and wind there.

China is also showing interest in this. You have known the country for many years. What significance do climate change and the energy system transformation have there?
They take these challenges seriously. In the northwest of the country, extensive solar plants with state-of-the-art thin-film technology are currently being built. In Beijing, there has been a switch to modern gas power plants. And the rail network is being expanded at full speed throughout the country. China is investing massively in research, including basic research. In some fields, the country is among the world’s best, for example in nanotechnology or artificial intelligence. I think it is important to keep updating our image of China to the current situation.

How deep are your insights into the Chinese scientific landscape?
I’ve been active in China for twenty years now, getting involved in joint research projects, giving courses and providing advice. Several Chinese professors have been in my laboratory as PhD students or postdocs. Of course, I tend to see the top universities in the country and not necessarily the weaker institutions that exist as well. I have no illusions about China’s hegemonic ambitions. Political cooperation is often not easy. But it is important that communication is going on. Science can make a significant contribution to this.

There are only a few female professors in your field. How did you manage to make a career and raise a child at the same time – at a time when working mothers were hardly supported at all?
My husband and I were both equally committed to our careers and shared the family work. Particularly difficult were long periods of commuting between home and work, as well as conferences and meetings where there were hardly any childcare options. I have always found it best to address my needs and proposed solutions clearly and in most cases I have found support for this.

As a professor in Bielefeld, how did you manage to deal with the promotion of women yourself?
I highly value diverse teams in which people from different disciplines and regions of the world work together. It is about responding to different life situations in the best possible way. Together with some female doctoral students we have seen that pregnancy can be well combined with writing a dissertation. We then had such situations several times and each time there were two joyful events within a short period. In my international work I try to give young female scientists confidence in their own abilities. I am thinking, for example, of the four years I spent as Chair of the International Combustion Institute, which has sections in 35 countries. The international association “Women in Combustion”, which I co-founded, offers an exchange platform for women scientists in the technical field. As president, I was able to help female colleagues from Japan to join together under this umbrella and increase their visibility.

How did you become a member to the GDNÄ?
I was invited to give a lecture at the 2004 meeting in Passau and became a member on that occasion. What I find particularly appealing about societies like GDNÄ is the interdisciplinary approach. It allows to look at and discuss a topic from different perspectives – that can be a very enriching experience. What I also like about the GDNÄ is its commitment to students. From the experiences with our student laboratory teutolab in Bielefeld and far beyond, I know how important the dialogue between schools and science is. This exchange will become even more important in the future. 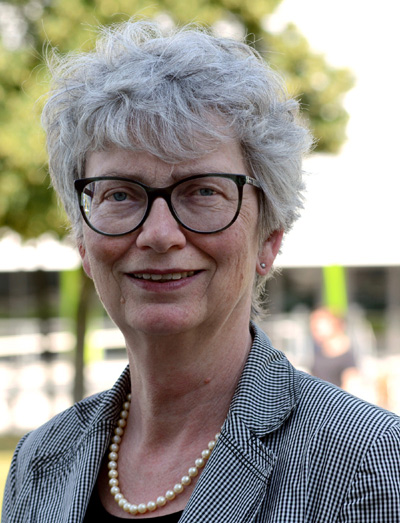 About the person
For Katharina Kohse-Höinghaus, her second term as Senior Professor of Physical Chemistry at Bielefeld University has just begun. In this function, the 68-year-old scientist is continuing her research work. She is internationally renowned for the diagnostics of combustion processes using laser spectroscopy and mass spectrometry.

In 1994, the scientist took up her work in Bielefeld. There she held a chair of physical chemistry until 2017 and worked as Vice Rector for Research and Young Scientists from 2001 to 2003. Since 2017 she has been an honorary senator of Bielefeld University. Before she moved to East Westphalia, Kohse-Höinghaus did research at the German Aerospace Center in Stuttgart, the Department of Mechanical Engineering at Stanford University and the Molecular Physics Laboratory of SRI International (a spin-off research institute of Stanford University). In 1992 she habilitated at the University of Stuttgart with a topic from energy technology.

On the initiative of Katharina Kohse-Höinghaus, one of the first German student laboratories called teutolab was founded in 2000; since then, she has intensively coached the project. In cooperation with committed teachers, teutolab organises workshops for students of all grades who are interested in science. Year after year, thousands of young people take part. Teutolabs now exist in various subjects at Bielefeld University. In addition, satellite laboratories have been established in the Bielefeld region and in several European countries, in Africa and in Asia.

For her commitment to teutolab, Katharina Kohse-Höinghaus was awarded the German Federal Order of Merit on Ribbon in 2007. In 2008 she was appointed to the German Academy of Natural Scientists Leopoldina. The internationally renowned scientist is a member of other academies as well as numerous committees and scientific institutions in Germany and abroad and has received many awards. She has been awarded honorary and visiting professorships in several countries. In 2007 she was the first woman to be elected president of the traditional German Bunsen Society. Katharina Kohse-Höinghaus was also a pioneer as President of the International Combustion Institute based in Pittsburgh, USA. She was the first European to hold this office from 2012 to 2016.