“We open windows into nature”

How Jörg Junhold modernised Leipzig Zoo from the ground up and opened many doors for the GDNÄ in his home town. His commitment makes the 200th anniversary a glittering celebration.

Professor Junhold, the anniversary meeting of the GDNÄ is approaching. What does the scientific meeting mean for your zoo?
It is a great honour for us and we are very happy that the GDNÄ is returning to its founding site for the 200th anniversary. After all, the meeting will take place in the immediate vicinity, in the Congress Hall at Leipzig Zoo. Of course, we hope that many conference visitors will take the opportunity to drop in on us – everyone is cordially invited. We are also part of the official programme: the traditional evening reception for the speakers and sponsors of the conference will take place in our tropical experience world Gondwanaland, in the presence of the Mayor of Leipzig, Burkhard Jung. 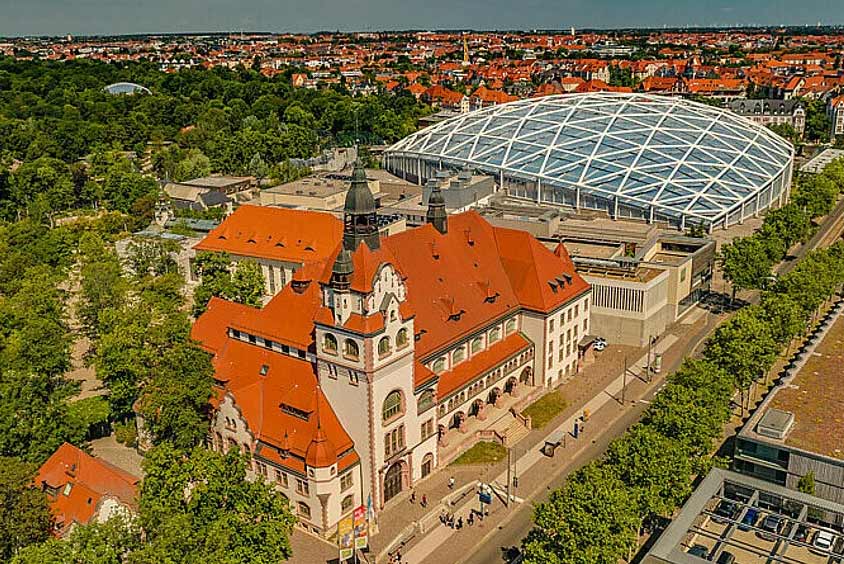 The Congress Hall, where the GDNÄ is celebrating its 200th anniversary, is right next to Leipzig Zoo.

You are not only the host during the conference, you are also represented on the board of the GDNÄ. How can we imagine your work there?
We have been working towards the meeting in the Board for two years, with regular meetings, which mostly took place digitally due to the pandemic. I was very warmly welcomed and it was great fun to work with so many bright minds. As Managing Director Economy, it was my task in the preparatory phase to open doors for the GDNÄ here in Leipzig and to win sponsors for the conference.

Looking at the programme, you have succeeded well. What is your secret?
There is no big secret. I am an enthusiastic Leipziger, have lived in the city since 1985 and am involved in many committees here. For example, in city marketing, on the university council or, for the past twenty years, on the board of the Cultural Foundation. In addition, the people of Leipzig love their zoo, it is really supported by the citizens and this then also radiates onto our concerns and projects.

You started as director of Leipzig Zoo on 1 November 1997. That was almost a quarter of a century ago. How did you find the zoo back then?
It was in a very difficult situation. The animal facilities were completely outdated, visitor numbers were in sharp decline and the finances were a disaster. The zoo was threatened with gradual closure.

Not a rosy starting position for a new director. Why did you take on the job anyway?
Because I saw a huge opportunity for the zoo. And I was incredibly excited to be able to help shape the city’s transformation. 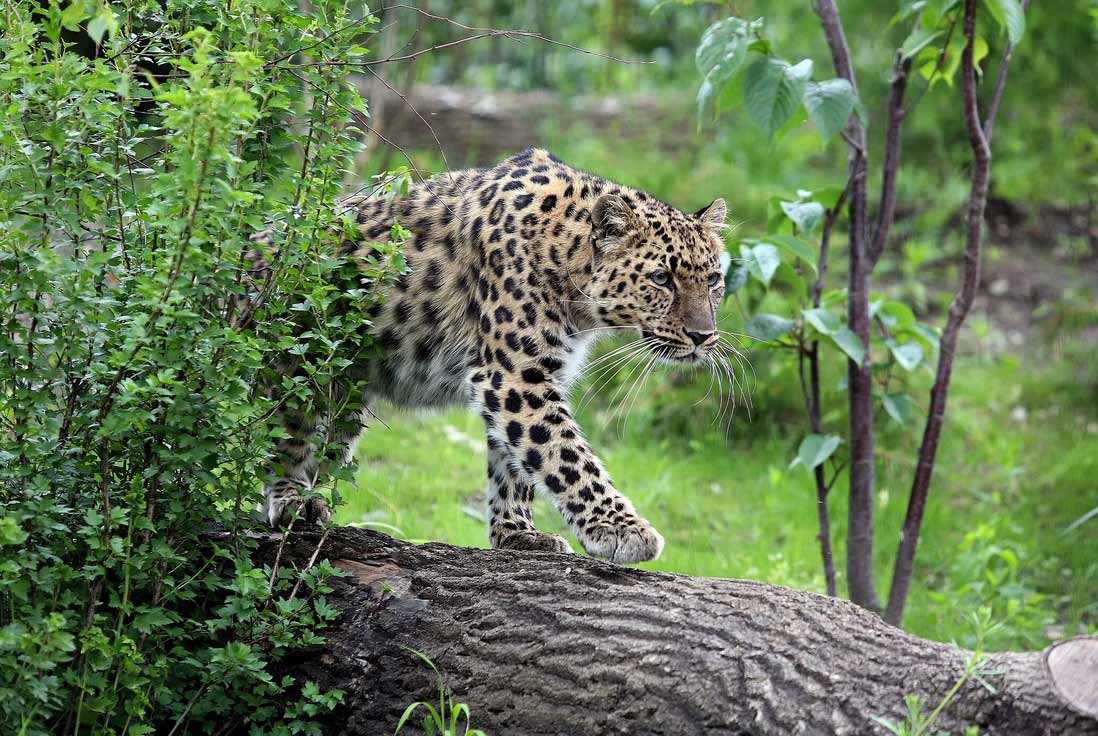 An Amur leopard goes on the prowl in Leopard Valley at Leipzig Zoo.

Where is your zoo today?
It has been completely redesigned and enjoys a great reputation, both among visitors and among experts – I can say that without exaggeration. Our zoo is now a popular leisure venue and is often booked for events, from weddings to elegant receptions to corporate events. All of this increases Leipzig’s attractiveness as a tourist destination, trade fair city and economic centre far beyond the borders of central Germany.

How has this been achieved?
Our “Zoo of the Future” master plan plays a central role. When I took up my post in 1997, I requested some time from the city of Leipzig to develop a renewal concept. We then worked on it with a small team in a good two years and presented it on 14 June 2000. I will never forget that day: Our vision of a modern zoo that meets animal needs at the highest level, opens a window to nature for visitors and at the same time convinces as an excellent host was unanimously accepted by the city council. For us, this was an enormous incentive and since then we have been implementing the master plan step by step.

Around two hundred animal species from Asia, Africa and South America live in the Gondwanaland tropical adventure world, which opened in 2011.

What have you achieved, what remains to be done?
Fortunately, most of it has been achieved. One milestone was the opening of the Gondwanaland tropical adventure world in 2011. This is a huge hall with many thousands of tropical plants, almost two hundred exotic animal species and a pristine rainforest like the one that shaped the primeval continent of Gondwana. Gondwanaland is our showcase project and has brought us international recognition. Another example is the world’s unique ape enclosure Pongoland, which we created in cooperation with the Max Planck Institute for Evolutionary Anthropology, also based in Leipzig. This year we were able to open the redesigned aquarium and in 2023 we will present a completely modernised terrarium. Intensive work is also being done on the Tierra del Fuego project with a walk-through underwater tunnel where visitors can experience penguins and seals as if they were diving. The Asian Island World with numerous aviaries and a crane facility will be the finale.

Allow us a look behind the scenes: How do projects like this come about?
Thank you for the question, because this creative process is what I love the most. We have a small development team consisting of veterinarians, biologists and architects. When we have a new project, we look around the world, get inspired by solutions from other zoos and develop our own ideas. Money doesn’t play a role in the beginning, the ideas should bubble up first – the plans can always be trimmed down later.

There is a lot of public discussion today about biodiversity and species protection. What role do these topics play for your zoo?
A very big one – not only for us, but for modern zoos all over the world. Habitats for wild animals are shrinking everywhere and the social importance of zoos as centres of nature and species conservation is growing accordingly. Our populations are self-sustaining, which means: we no longer take animals from the wild, but manage our animal populations through so-called conservation breeding programmes in which zoos worldwide participate. For many endangered species, we house reserve populations and have the necessary expertise to treat sick animals, whether in the zoo or in the wild. And, most importantly, we raise awareness of the biodiversity crisis and encourage people to do something about it.

Is your zoo also involved in science?
Yes, that is actually a major concern for us. We run long-term species conservation projects that are intensively monitored scientifically. In Vietnam, for example, in the Cuc Phuong National Park. There, we are preparing langurs that were confiscated from illegal captivity for reintroduction into the wild. These leaf-eating primates are endemic to Vietnam and have become rare. In Chile, we maintain a breeding station for an endangered frog species together with the University of Concepción. Overall, we see ourselves as a scientifically working zoo, managed by biologists and veterinarians as a non-profit institution and thus meeting the quality criteria of the World Zoo Association. Commercially oriented safari parks do not meet these standards.

You have headed the International Zoo Association, are on the board of the European Zoo Association and now head the German Zoo Association. What do you gain from this work?
It broadens your horizons, sharpens your eye for the essentials and leads to many good contacts. In the meantime, the international zoo world comes and goes here in Leipzig – and that has a lot to do with the committee work.

Where does Leipzig Zoo rank today in international comparison?
We belong to the top group. In the Europe-wide zoo ranking by the British expert Anthony Sheridan, we are currently in second place behind Vienna and ahead of Zurich, and we are number one in Germany.

In a few years, the master plan will be completed. Is your zoo’s 150th birthday in 2028 the next major project?
We will of course celebrate the birthday in a big way, together with our visitors. There are already many ideas – let us surprise you.

Professor Jörg Junhold has been Managing Director and Director of Leipzig Zoo since 1997. The now 58-year-old comes from the Brandenburg town of Ortrand and studied veterinary medicine in Leipzig, where he received his doctorate in 1994. At that time, the licensed veterinarian was already working for Europe’s largest manufacturer of animal feed, Effem GmbH  – initially in field sales, later in marketing. In 1997 he was appointed head of Leipzig Zoo. His strategic concept “Zoo of the Future”, presented in June 2000, is still groundbreaking today. Since 2013, Jörg Junhold has been an honorary professor at the Faculty of Veterinary Medicine at Leipzig University. He has received several awards, including the Order of Merit of the Free State of Saxony. Junhold was president of the international umbrella organisation of larger zoos and aquariums, the World Association of Zoos and Aquaria, and its European counterpart. He has been President of the Association of Zoological Gardens in Germany since 2019.