Promoting young research talent is particularly close to the heart of biochemist Eva-Maria Neher. She founded the Göttingen Experimental Laboratory for Young People (XLAB) and gave decisive impetus to the GDNÄ’s student programme.

Professor Neher, you have been involved with the GDNÄ for many years: for the student programme, in committee work and, a few years ago, as president. What drives you?
Clearly my love of science, especially the natural sciences. I am interested in many fields, but today it is almost impossible to keep up to date everywhere. That’s where the GDNÄ comes in handy: at its conferences, it brings together top-class scientists from different disciplines who present the latest research as if on a silver platter – you just have to grab it.

When was the first time you had this silver platter experience?
It was, I can still remember it well, at the 2004 meeting in Passau. It was under the motto “Space, Time, Matter”. I was thrilled by the lectures, by the stimulating atmosphere and became a member shortly afterwards.

The XLAB attracts young talent from all over the world.  © Sven Dräger

That was the time when you also set up and ran the experimental laboratory for young people XLAB in Göttingen – a very active time.
For me it was a period of big changes. After a scientific career that had just begun, I had to take a long family break with five children – nine years in total. After that, I really wanted to return to science. But in the 1990s there was practically no chance of returning to research. So I looked for other ways and developed plans for a laboratory where students in grades 11 and 13 could experiment together with scientists. We were able to hold the first courses in the laboratories of the Faculty of Chemistry at Göttingen University in 1999; the XLAB opened a year later.

At that time, there was much public discussion about the human genome, stem cells and green genetic engineering. At the same time, science was opening up more and more to exchange with society. So the conditions were good for the XLAB?
Yes, it came at exactly the right time. Public interest in research topics was great, but many people lacked basic scientific knowledge. I am convinced that this is best acquired by experimenting in well-equipped laboratories and in personal contact with scientists. Fortunately, we were able to convince not only many great researchers at Göttingen University of this, but also the state government of Lower Saxony, which has been supporting us ever since. Soon we had our own building, and highly motivated, hand-picked students flocked in from all over the world for courses lasting several days in chemistry, physics, biology and computer science. Over time, I was able to establish two XLAB experimental labs abroad: one in Argentina at the Max Planck Research Centre in Rosario and another in China, in Shenzhen. Both projects are very actively run by highly appreciated researchers. However, interest in Göttingen as a location continues unabated, although in Corona times, online courses naturally dominate. Currently, the XLAB is being expanded to include a meeting centre with overnight accommodation in order to be prepared for the anticipated post-pandemic onslaught.

You retired from the XLAB in 2018 but remain involved with the GDNÄ’s student programme. How has it developed from your perspective?
The programme is on a good course, I would say, and a win-win situation. The GDNÄ needs the young people to give it a new shine in the long term. And the students are enthusiastic about the challenging programme, as the feedback shows. Some are meeting peers for the first time who tick just like them and are passionate about science – so the joy is naturally great. When I was elected to the GDNÄ board in 2012, I immediately took care of the student programme and brought Paul Mühlenhoff, an excellent member of staff from the XLAB, on board. He dug deep into the new task and made the programme what it is now. 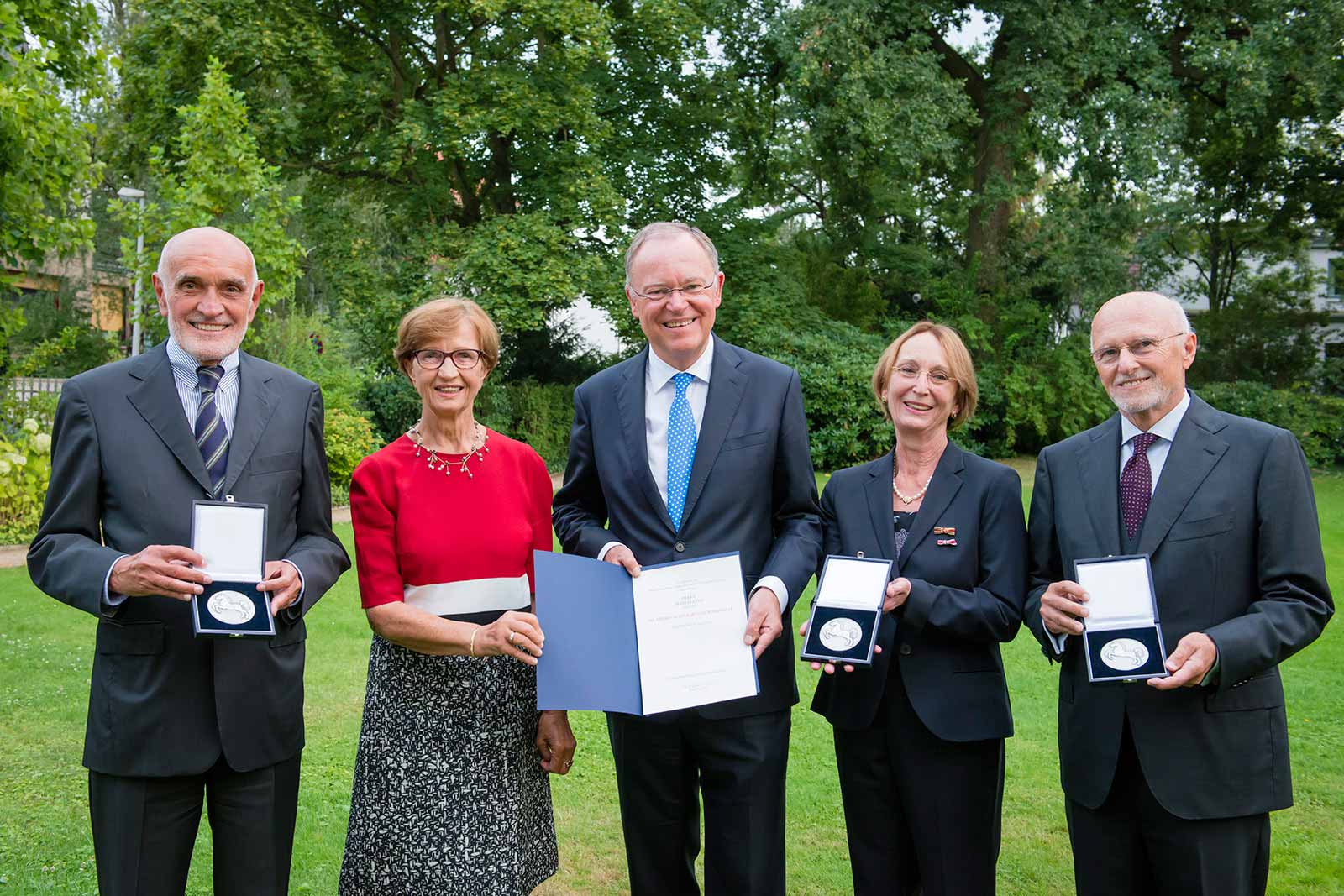 Where does the student programme stand today?
The young people are taking an increasingly active role in the meetings. For example, at the 2016 meeting, which fell during my presidency, we relaunched the “Science in 5 Minutes” format. It is a kind of science slam by students for students with the aim of presenting a research topic in five minutes in an understandable and entertaining way. The participants are always very enthusiastic and can practise presenting and discussing along the way. We are planning exciting new programme formats for the 200th anniversary celebrations in Leipzig – I am already looking forward to it.

The student programme is undoubtedly an important task of the GDNÄ. What else?
Above all, sophisticated science communication. There are many people who want to learn more about high-level research – not from books and not from the media, but from scientists themselves. At its meetings, the GDNÄ is already moving in this direction. But I would like to see more of this happening between meetings in the future.

The CEO of Sartorius AG , Dr Joachim Kreuzburg, hands over a 3D printer as a gift to the XLAB in 2016. © Sven Dräger, XLAB

If I may ask something personal: You are married to a famous scientist, the Nobel laureate in medicine Erwin Neher. One always hears that the Nobel Prize upsets the lives of laureates. Was that also the case in your family?
My husband actively prevented his life from being disrupted – and our lives didn’t change too much either. We are both very down-to-earth, live in a small community near Göttingen and have tried to raise our children as modestly as possible. They have all completed their studies according to their interests and are now confidently following their respective professional careers.

Coming from the Ruhr area, you yourself took a completely different path. How do you look back on it?
I was born in 1950 in Mülheim an der Ruhr as the daughter of a gardener. The most I was expected to achieve was a secondary school leaving certificate, because girls, as they said at the time, would marry later and stay at home. I was only allowed to take the Abitur on the condition that I didn’t have to repeat a year. I applied for admission to the natural science grammar school, which today bears the name of the Nobel Prize winner Karl Ziegler from Mülheim – and I was successful. At that time, the school was attended by about 800 boys and only four other girls. It was a good school for life. I learned to go my way even without special privileges.

As GDNÄ President in 2015 and 2016, Professor Eva-Maria Neher organised the Assembly in Greifswald on the theme of “Natural Sciences and Medicine”. She is currently involved in the preparation of the 200th anniversary assembly in Leipzig. The biochemist from Mülheim an der Ruhr became internationally known as the founder of the XLAB, the Göttingen experimental laboratory for young people. She directed the XLAB, which opened in 2000, until 2018.

From 1969 to 1973, Neher studied biochemistry, organic chemistry and microbiology at the Georg-August University in Göttingen. She graduated in 1974 and received her doctorate in 1977 with a thesis on the regulation of the biosynthesis of poly-β-hydroxybutyric acid in Alcaligenes eutrophus H16. She then worked as a scientific assistant in renowned Göttingen research institutes. Following a family break, Eva-Maria Neher taught experimental courses in chemistry and biology at the Freie Waldorfschule Göttingen in the 1990s and developed the first concepts for the XLAB. Eva-Maria Neher has been married to Nobel Prize winner Erwin Neher since 1978. She is the mother of five children.

For her social commitment, the scientist was awarded the Lower Saxony Order of Merit in 2002 and the Lower Saxony State Prize in 2007. In recognition of her scientific career and her services to science education, the Faculty of Chemistry at Göttingen University awarded Eva-Maria Neher an honorary professorship in 2009. In 2013, she was awarded the Cross of Merit 1st Class of the Federal Republic of Germany. In 2018 she received the Lower Saxony State Medal and in 2019 the Initiative Award of the Susanne and Gerd Litfin Foundation. From 2014 to 2021, Neher was Chair of the University Council of the European University of Flensburg. She has been a member of the University Council of the University of Applied Sciences and Arts (HAWK) in Lower Saxony since 2008; she has held the chair since 2012. Eva-Maria Neher is the chairwoman of the XLAB Foundation for the Promotion of Natural Sciences, which she founded, and works on the design of the XLAB Encounter Centre.

The XLAB building on the campus of Göttingen University. © Architects Bez+Kock