In the corona pandemic, assessments from the scientific community are in great demand. Representative surveys show that the German public trusts the statements to a high degree and would like to receive even more information.

In the corona crisis, the credibility of science has increased significantly in Germany. In a representative survey for the Science Barometer 2020, 66 percent of respondents said they trusted science and research. In similar surveys conducted by the “Science in Dialogue” initiative in the years 2017 to 2019, only around 50 percent had this attitude.

The Allensbach Institute for Public Opinion Research also identified a clear increase in trust in research in 2020. According to this, 43 percent of those surveyed rely on scientists to tell the truth. In 2015, the corresponding figure was only 30 percent. This puts the professional group of researchers in third place in terms of credibility. Only the long-standing front-runners, doctors and judges, perform better.

For a constructive dialogue

Researchers are not only valued for their contributions to advising politicians and the public. According to the Allensbach study, every second German (54 percent) also perceives the natural sciences as an important source of inspiration for the future. According to the study, the reputation of parties and politicians as creative forces has risen from 25 to 31 percent. In contrast, the perceived influence of journalists (from 26 to 19 percent) and citizens’ movements (from 42 to 29 percent) has declined.

“The figures show that the majority of the population trusts science, especially in critical times”, says Martin Lohse, President of the German Society of Natural Scientists and Physicians (GDNÄ). But science should not take this trust for granted. Lohse adds that the GDNÄ therefore feels a responsibility to promote constructive dialogue between research and society.

There is a lot of catching up to do when it comes to communicating science. This is confirmed by other representative surveys, such as the Technikradar (Technology Radar) 2020. In this survey conducted by the German Academy of Science and Engineering (acatech) and the Körber Foundation, only 15 percent of the approximately two thousand respondents were satisfied with the way in which politics informs about the consequences of technology. As many as 70 percent demand greater involvement of citizens in the introduction of new technologies.

The focus of Technikradar 2020 is on bioeconomy. The term refers to new products, processes and services that contribute to a more sustainable and future-proof economic system. “Conventional solutions for energy generation, mobility and industrial production based on fossil fuels are coming under increasing pressure from the public to justify themselves”, says the Technikradar report. For example, more than half of the Germans in the survey are in favour of politicians pushing through measures for climate protection, even if the economy suffers as a result.

The evaluation of individual subject areas of bioeconomy varies. 88 percent of those surveyed are in favour of replacing plastics with organic products. Three-quarters think gene therapies for adults are good. 60 percent plead for more research funding to develop biofuels. But only one in four can get along with eating meat from the laboratory. The approval rate for genetically modified plants is even lower.

Many of these developments hold great potential in a world facing pressing issues: How do we manage global crises? How do we stay healthy? How will we live, move and communicate with each other? “These questions cannot be answered by climate researchers, doctors, social and natural scientists alone”, says Martin Lohse. “This is another reason why platforms like the GDNÄ are becoming increasingly important for a rational and interdisciplinary dialogue between science and society and for the exchange between the younger and older generations.”

The conditions for dialogue appear to be good. The Technikradar 2020 reports broad public support for science and technical progress. 48.7 percent of those surveyed believe that technological development will provide a higher quality of life for future generations. Only 16 percent do not agree with this statement. .

The general level of technology friendliness is strong or very strong in 52 percent of those surveyed, and low or very low only in 11 percent. According to the evaluation, it makes no difference whether the respondents live in East or West Germany, in a large city or in the countryside. On average, men are still more technology-oriented than women. And the higher the level of education, the greater the interest in technology.

What the Technology Radar 2020 also shows: a better understanding of scientific results does not necessarily increase the willingness to change one’s own behaviour. Admittedly, the statements of scientists in the corona pandemic contribute decisively to the fact that restrictions of daily life are widely accepted. But this does not apply to environmental and climate protection. Most of those surveyed reject additional financial burdens for themselves, and only a third are in favour of governmental pressure on individuals to act in an environmentally sound manner. 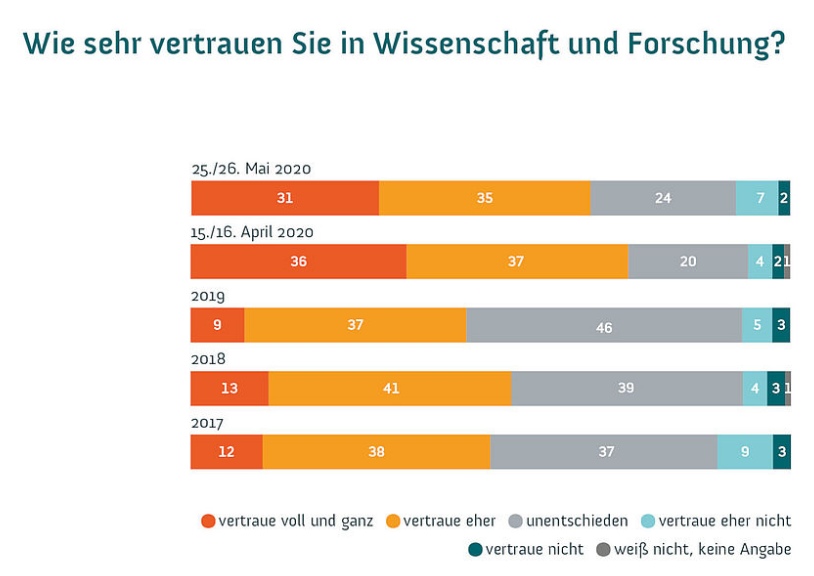 Figure from the “Science Barometer 2020” 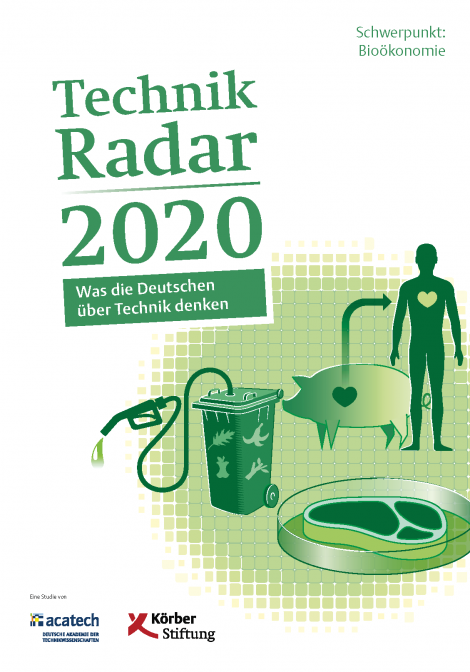 Title page of “Technikradar 2020”, a representative survey of attitudes towards science and technology