Ekkehard Winter, Managing Director of the Telekom Foundation, on the weaknesses of today’s schools, a novel educational ecosystem and his extraordinary start in the GDNÄ

Dr. Winter, the corona crisis is spreading, some schools are closing down and temporarily switching to home schooling. Do we actually know what effect this has on students?
In April, i.e. during the nationwide school closures, we interviewed a good thousand 10- to 16-year-olds and their parents. As a result, most of them have coped well with learning at home. However, it also became apparent that the children and youths very much lack contact with fellow students and teachers. Most students have their own room at home and can work there in peace and quiet. The technical equipment with computers, laptops and smartphones is also mostly good.

So the conditions for school at home are good?
Unfortunately not. Apart from the fact that a smaller, but not insignificant group of students completely lack the above-mentioned prerequisites, there are weaknesses, especially among schools and teachers. The children, youths and parents interviewed would like to see significantly more support from them. Only half of the students received feedback on submitted work and many of them complained that the teachers were not available for questions. In addition, there was hardly any creative knowledge transfer via real distance learning, explanatory videos or digital group work. Instead, the teachers sent assignments and worksheets by e-mail and let their students read and write texts.

What consequences does this have, for example, for mathematics and science lessons, which is the primary focus of your foundation’s work?
In the so-called MINT subjects, i.e. mathematics, computer science, natural sciences and technology, the 10- to 16-year-olds have the greatest need for support. This is because tasks are often not understood as well as in the social sciences or foreign languages. Moreover, as our study shows, such important experimental work is almost completely neglected in online teaching. Yet many things would be possible today. Sad conclusion: the deficits in home schooling are heavily at the expense of the MINT area.

More than half a year has passed since your survey. A lot of time for the changeover.  Has it been used?
I do not have the impression that much happened in the schools during the summer. For example, only a few places have developed hybrid learning formats with presence and online components. At the universities, things are completely different: in the past few months, the majority of the courses on offer have been prepared for digital teaching.

Why can this not also be done in schools?
Most teachers simply lack the know-how for modern online teaching. Another reason is the rampant education bureaucracy which makes fundamental changes difficult. And school administrators have to deal with too many other things besides their actual tasks – for example, ventilation systems.

At the opening of the Berlin science centre “Futurium”: Ekkehard Winter plays a board game on artificial intelligence with children.

Many challenges, then. Can they be overcome?
We have no other choice. The Corona crisis is a merciless reminder of the weaknesses of the school system – it is no longer possible to simply look away and hide. The deficits have been known for years. They became apparent, for example, in the international comparative study ICILS 2018, which dealt with media competence. Germany’s students came in at the bottom of the league in a comparison of countries. The technical equipment of the schools and the digital competence of teachers also scored badly. Germany is now upgrading its technical equipment, and a lot of money is currently flowing into it. However, pedagogical competence is still inadequate.

Does this apply to all schools or are there not some laudable exceptions?
Fortunately, there are even many good examples of how teachers use digital media productively and with a high pedagogical-didactic added value. We and other foundations and associations such as the Forum Education Digitisation are trying to make these best practice examples known and use them as models. However, this is difficult, also because many teachers who are now working at the schools have neither become acquainted with the new possibilities during their training nor have been able to practise them in suitable further training courses. Incidentally, this applies to older and younger teachers alike.

What does it take to bring about real change?
We need nothing less than a cultural change in the education system. A positive attitude towards the new and a desire to learn throughout one’s working life. It is important to have strong school administrators and colleagues who see themselves as a team and carry this spirit into the classroom. The lone warrior mentality among teachers that still prevails today has survived. For the world of tomorrow we need young people who can develop their creativity and enjoy learning together.

Your foundation focuses on the 10 to 16 year olds. It is precisely in this age group that the desire to learn seems to have dried up.
That is true.  But the flame is still there. You only have to blow on it, then young people do the most amazing things, as we know from many projects.  They really bite down hard when something really interests them and when it seems important to them for their lives. That’s the way they want to go to school, as we have seen in our new study “How do children and young people learn today?”. School is currently seen as the central place of learning, but it is not the place where young people like to learn. This is why our foundation is increasingly focusing on extracurricular learning, whether in modern libraries and museums, youth centres or project workshops such as Makerspaces. We propagate an educational ecosystem in which the school is part of a large network.

In which science also has a role to play?
A very large one, especially in the MINT area. I have seldom experienced such enthusiasm for physics as when a school and scientists at Geneva’s CERN discussed via direct video connection. At CERN, physicists use gigantic particle accelerators to investigate the structure of matter. So what is fun about MINT is not labelled MINT, but instead CERN – or GDNÄ. The fact that the GDNÄ invites students and teachers to its meetings and offers special programmes in the field of education is exemplary for the education system of the future.

Before your involvement in the education sector, you promoted the dialogue between science and society at the Stifterverband. A field in which the GDNÄ is also active…
…and already played an important role in the 1990s, especially in the shape of its former presidents Joachim Treusch and Detlev Ganten. German journalists and scientists made their annual pilgrimage to the conferences of the American Association for the Advancement of Science, or Triple AS for short. Detlev Ganten had the idea of creating a European counterpart. That was a time of great hopes for the future. Together with colleagues, I was able to contribute to the establishment of the pan-European science conference EuroScience Open Forum. In the meantime, ESOF has become an institution – the next conference is to be held in Leiden in 2022.

How did you come to DGNÄ?
I was working in Konstanz and wanted to take the opportunity to ask then GDNÄ President Hubert Markl for advice. So we met in his institute and I presented my request. “I can give you this advice”, said Markl, “but on condition that you become a member of the DGNÄ”. He handed me a form, I signed it and left with a few good tips. Well, that’s how membership recruitment used to work back then. 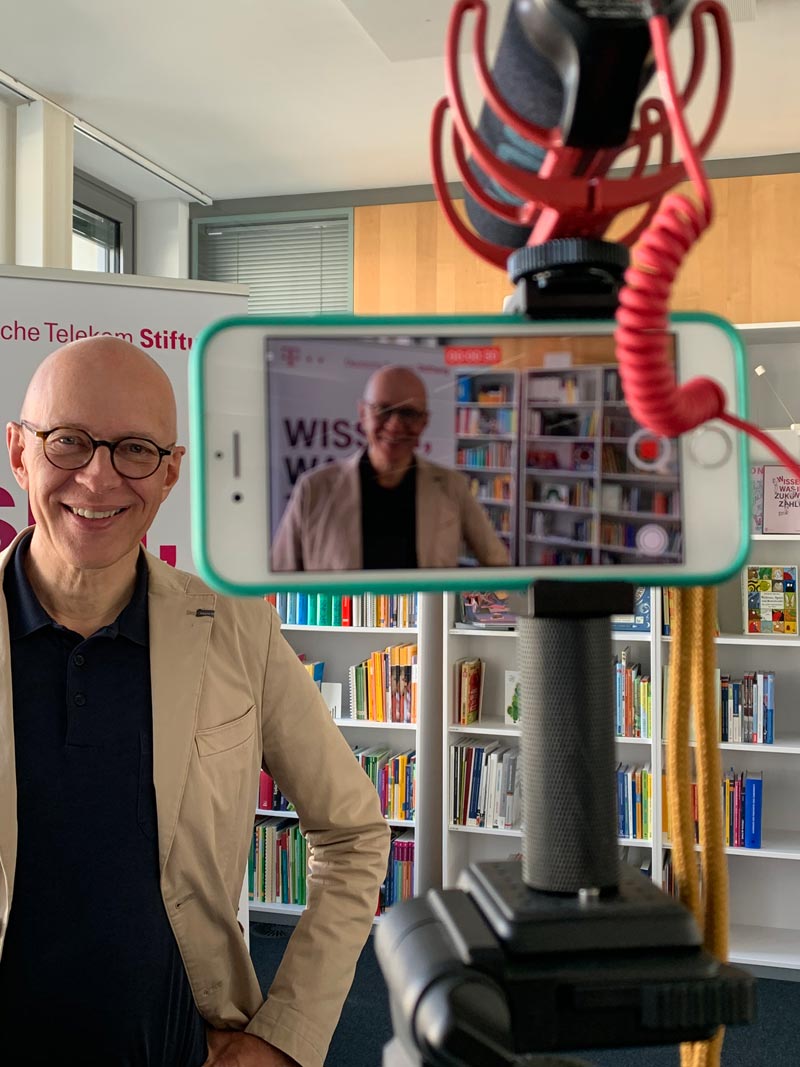 Ekkehard Winter in front of the camera: scene of an interview for a social media channel of the Telekom Foundation. 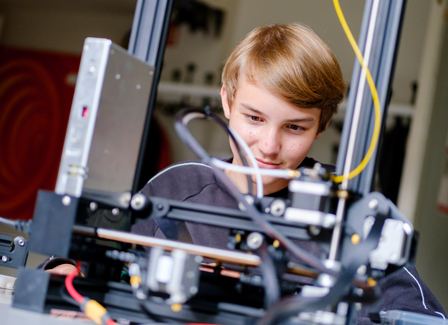 Fascination 3D printer: Impression of a school project of the Telekom Foundation in Bonn.

About the person
Dr. Ekkehard Winter (62) has been Managing Director of the Deutsche Telekom Foundation since 2005. After studying biology and completing his doctorate at the Institute of Genetics at the University of Cologne, Winter joined the then newly founded Academy of Sciences in Berlin as a scientific advisor. Two years later, he moved to the Stifterverband in Essen. There he was responsible for programmes on higher education reform and supervised a number of foundations in the field of natural and life sciences. In 1999, Winter worked at the Engineering and Physical Sciences Research Council (EPSRC), the largest British research funding body. A year later he took over as head of the “Programme and Funding” department at the Stifterverband and became Deputy Secretary General of the Stifterverband in 2003. Since 2017 he has been co-spokesman of the National MINT Forum. Ekkehard Winter is co-founder of the nationwide initiative “Wissenschaft im Dialog” (WiD), which was founded in 2000 by all German science organisations, and of the Euro Science Open Forum (ESOF). Until February 2020, he headed the “Education and Training” working group of the Association of German Foundations and is a member of numerous other committees in the fields of education, science and foundations.

German Telecom Foundation
Launched in 2003 by Deutsche Telekom, the Telekom Foundation is now one of the largest educational foundations in Germany with a capital of 150 million euros. The Telekom Foundation is committed to a sustainable education system in a digital world and focuses on the subjects of mathematics, computer science, natural sciences and technology (the so-called MINT subjects). It provides around ten million euros annually for projects in this area. The foundation is based in Bonn and employs 20 people. Since 2018, former Federal Minister, Dr. Thomas de Maizière, has been Chairman of the Board of Directors.

>>  Study “How do children and young people learn today?”